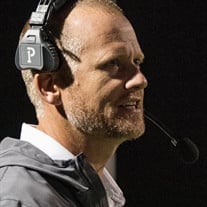 James Daniel Maberry, 47, of Mansfield, Texas, died in Dallas, Texas on Tuesday, February 4, 2020 after a lengthy and very courageous battle with cancer. A memorial service will be held Monday, February 10, 2020 at the Mansfield Performing Arts Center at 2:00 in Mansfield, Texas with Erik Erby, of Walnut Ridge Baptist Church officiating. Arrangements are under the direction of Blessing Funeral Home. Daniel was born on May 1, 1972 to David Maberry and Harriett Halford Fuller in Austin, Texas. He grew up in Clyde, Texas and graduated from Clyde High School. He was involved in football, basketball and track. Daniel always appreciated that he got to attend a small school and excelled at many sports. Daniel graduated from Texas Tech University in 1997 and obtained a degree in Kinesiology. He then spent one year with the Wesley Foundation Student Ministry in Lubbock, Texas. He began his teaching and coaching career at Worley Middle School in Mansfield, Texas in 1998. Daniel was hired as a freshman football, basketball and track coach in 2002 at Mansfield High School. He also served as a JV coach, offensive coordinator and in 2016 he was chosen to be the head football coach of Mansfield High School. It is rare for a coach to spend their entire career in one place, but that is something he was very proud of. He made Mansfield his home and loved being a Tiger. Daniel’s faith and trust in God was what made him such a wonderful and kind person. He always said he wanted people to know Jesus through his words and actions and he lived that on a daily basis with his family and through his career. Throughout his battle with cancer and life he wanted to share his faith with others. Without God and the love and prayers from others, it would have been an impossible fight. He fought with courage and conviction with Jesus by his side. Daniel met Cami Rea in 2003 at Mansfield High while both were coaching basketball. They knew immediately that they wanted to get married. They were engaged in the summer of 2004 in Venice, Italy. They were blessed with the arrival of Ryan Nicole Maberry on June 4, 2008 and Evann Grace Maberry on April 14, 2011. The thing he was most proud of was his family and they always did everything together. They enjoyed family trips skiing, loved hiking in Colorado and trips to Disney World and just spending time together. If you were ever at a Mansfield sporting event, you can bet they were there together. He always wanted his coaching staff to feel that it was a family atmosphere so that is what they did. Daniel had a passion for skiing and often took ski trips with his best friend Earl. He had become quite a good skier over the years. He was delighted the first time he got to take his daughters and they loved it, which made him so happy. He also taught himself how to play the guitar. He loved playing praise music and singing with his girls. Daniel was everybody’s best friend, over the years he was in 16 weddings. Daniel loved teaching and coaching. It was important to him to make relationships and having a lasting impact on each and every student he came in contact with. In his 18 years at Mansfield High he has mentored countless young men and women and stayed in contact with many of them. His football staff is truly his family and that is a testament to what was important to him. Daniel was preceded in death by his mother, Harriett Fuller. He is survived by his wife Cami, daughters, Ryan and Evann, his parents David and Jan Maberry, brother Jeff Maberry and wife Angela, their sons, David and Luca, brother Janson Head and wife Stacy, their daughters, Kelsey, Kailyn, Kyleigh, and Kambree, In-laws, Gary and Cindy Rea, brother in law, Chris Rea and wife Mandy, their children, Layne, Ethan and Jessica, brother in law, Cody Rea and wife Laura, their children, June and Townes, many aunts, uncles and cousins and many, many close friends. In lieu of flowers, memorials can be made to a charity of your choice.

James Daniel Maberry, 47, of Mansfield, Texas, died in Dallas, Texas on Tuesday, February 4, 2020 after a lengthy and very courageous battle with cancer. A memorial service will be held Monday, February 10, 2020 at the Mansfield Performing... View Obituary & Service Information

The family of James Daniel Maberry created this Life Tributes page to make it easy to share your memories.

Send flowers to the Maberry family.