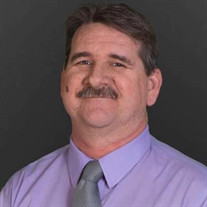 James Calvin Rich, Jr. passed away on Monday, August 19, 2019 in Dallas, Texas. James was born in Beaumont, Texas on April 29, 1968, the son of James Calvin Rich and Joann Laurent Rich. James graduated from Vidor High School in 1986. He married Lori Rogers in the Vidor Church of God, Vidor Texas, October 19, 1991. Soon afterwards they moved to the North Texas area where James graduated from Tarleton State University in 1995, after completing his Bachelor’s Degree in three years. He received his Master’s Degree from UT Arlington in 2011. He was the Director of Communication for Lancaster ISD in Lancaster, Texas. He received the Spirit of a Champion Award from Duncanville ISD in 2015. He received the ILPC Edith Fox King Award in 2010. James was an Ordained Minister in the Church of God and served as a youth pastor, associate pastor, and any other role he was ask to serve in the church. He was the Texas Church of God Youth Pastor of the Year recipient in 1995. His passion was to reach the youth for the glory of God. He was a member of Harvest Christian Center in Keller, Texas. He was an avid hunter and fisherman who loved God, his family and served in any way he could. He was always excited to share the love of God through serving in the church, assisting people or preaching the word of God. James was preceded in death by his mother, JoAnn Rich, grandparents, Virgil and Lucille Rich and Elmer and Ruth Larent, father in law, Richard Rogers and mother in law, Mary Rogers. He is survived by his Wife, Lori Rich of Lillian, Texas; sons, Justin Hendrixson of Arlington, Texas and Tyrel Rich of Lillian, Texas; daughter Candace Rich of Burbank, CA; sisters and brothers in law, George Rich and wife Tracey of Vidor, Texas, Mary Bivens and husband Craig of Vidor, Texas, Beverly Starkweather and husband Paul of Vidor Texas; sister and brother in law Susie and James Blaylock of Mineral Wells Texas: brother and sister in law Richard Rogers and wife Amy of Silsbee Texas; nieces and nephews, Kyle Rich, Josh Rich and wife Rachel, Allan Bivens and wife Haylee, Brittany Belden and husband Scott, James Blaylock, II and wife Paula, Charlie Blaylock and wife Laura, PJ Watkins and husband Andy, Jacob Rogers and wife Brittany, Cody Rogers, Brandon Rogers and wife Emilea, Matthew Rogers, Abigail Rogers and a multitude of family, friends and brothers and sisters in Christ.

The family of James Calvin Rich Jr. created this Life Tributes page to make it easy to share your memories.

Send flowers to the Rich family.