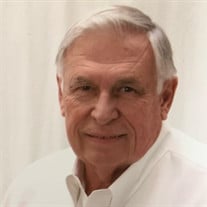 Jerry Kearns Drolte was born in Shattuck, Oklahoma on March 12,1941 to Margaret and Frederic Drolte. Jerry grew up in Amarillo, Texas where he was active in activities at Amarillo High. He attended Baylor University and West Texas State University where he met Patty, his sweetheart for 58 years. Through his love for cars, Jerry began his career at B. F. Goodrich. His infectious personality and skilled salesmanship lead to a successful career as a JennAir appliance salesman for Harper Distributing which he loved, earning him numerous awards and trips. Later he represented Merillat cabinetry and developed successful relationships with builders throughout the metroplex. He was a loving husband and devoted father. The women in his life were well loved and taken care of…never learning to fill up their gas tank. He was a great “girls” dad, enduring shopping trips and never blinked at the armloads of “bargain” shoes and dresses. He entertained all their friends and was always actively involved and known for his salesman jokes. He was an active member of Handley Baptist and the East Fort Worth community. He had a servant’s heart and served in Sunday School for many years. Jerry was also eager to chaperone high school youth trips where he was enthusiastic to drive the bus and instigate mischief. He loved his time spent on Lake Granbury, often pulling a never- ending line of tubers and skiers across the lake. He loved fishing, entertaining, giving colorful tours of Granbury and spending time with the Eastside gang. He and Patty moved to Mansfield to be closer to his children and grandchildren. He stayed active attending the grandkid’s sports and activities from preschool through college, cheering them on. He found a great church family and friends in Mansfield where he served the members of his class faithfully. He looked forward to weekly dinners and card games with friends. Jerry’s greatest asset in life was his love for people. He never met a stranger and his servant’s heart was evident in his daily walk through life. He made everyone feel welcome, and delivered smiles and laughter wherever he went. He passed away on March 12, 2021 on his 80th birthday. It was a sad and difficult day for family and friends, and yet they knew heaven was rejoicing at the entrance of a good and faithful servant. He is survived by his wife, Patty of 58 years, his daughter Dorinda Smith(Troy) of Allen, Texas; daughter Karen Curtis (Scott) of Mansfield, Texas; four grandchildren Wade, Kay Marie, Kendall and Riley; and his sister Katy Burke (Taz). He was a dedicated brother-in-law, uncle and great uncle to his large extended family-the Scott, clan. In lieu of flowers, Jerry's family request donations be made to: Allies in Youth Development, 1315 HWY. 1187, STE. 115, Mansfield, TX. 76063 https://alliesyouth.org/

Jerry Kearns Drolte was born in Shattuck, Oklahoma on March 12,1941 to Margaret and Frederic Drolte. Jerry grew up in Amarillo, Texas where he was active in activities at Amarillo High. He attended Baylor University and West Texas State University... View Obituary & Service Information

The family of Jerry Kearns Drolte created this Life Tributes page to make it easy to share your memories.

Jerry Kearns Drolte was born in Shattuck, Oklahoma on March 12,1941...

Send flowers to the Drolte family.