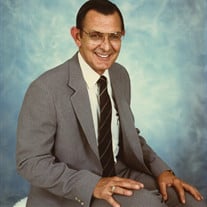 Jesse Wayne Howard (Dandy) passed away peacefully at Mansfield Methodist Hospital, surrounded by his loving family on Thursday, August 02, 2018 at the age of 83. Viewing will be held at Blessing Funeral Home in Mansfield on Tuesday, Aug 7th from 6pm-8pm. Celebration of Life service will be held Wednesday, Aug. 08, 2018 at 10:00am also at Blessing Funeral Home. Jesse Wayne was born November 12, 1934 in Mansfield, Texas to Horace William and Mattie Geneva Howard. Jesse Wayne and Kathryn were united in marriage March 20, 1954. They lived across the street from each other on Short Street. Jesse and Kathryn were childhood sweethearts. They both graduated from Mansfield High School in 1952. Jesse completed high school in three years so he could graduate with Kathryn. After Graduation, Jesse started to work at Muntz T.V. installing antennas. In 1980 Jesse started working for Johnson county Appraisal District as their Chief Appraiser in Cleburne, Texas, before returning to Mansfield ISD as the Tax Assessor-Collector. July 1982, Jesse took a position with Tarrant Appraisal District in Ft. Worth as Director of Field Appraisals until he retired. Jesse and Kathryn were both members of the Mansfield Church of Christ, where Jesse served as a deacon. He also served as trustee on Mansfield's Board of Education, and as a volunteer in the Mansfield Fire Department, as well as the Mansfield Umpires Association. Jesse was proceeded in death by his beautiful wife of 63 years Kathryn Carol Turner Howard, and Horace and Geneva Howard (Parents) Survivors: Daughter Fredda Kay and husband Mike Cook, Grandsons Michael Paul and Danny Messick, Randall Wayne and Amy Cook, Ethan Daniel Fitzgerald, Great Grand daughters Tara, Makayla, and Kylie, Sister-n-law Rose Marie Turner Frashier and Richard, and several loving nieces and nephews.

Jesse Wayne Howard (Dandy) passed away peacefully at Mansfield Methodist Hospital, surrounded by his loving family on Thursday, August 02, 2018 at the age of 83. Viewing will be held at Blessing Funeral Home in Mansfield on Tuesday, Aug 7th... View Obituary & Service Information

The family of Jesse Wayne Howard created this Life Tributes page to make it easy to share your memories.

Send flowers to the Howard family.