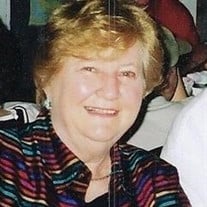 JoAnn Evelyn Anderson Padgett went to be with her Lord and Savior October 18th surrounded by ones who loved her, just two months after the love of her life. She was born at home in Oklahoma City, Oklahoma on September 29th, 1932 to Basil and Edna Francis Wright Anderson. She spent most of her young life moving to different homes and taking care of her younger brother, Robert Dale. She attended Taft Junior High and Classen High School. The family owned and operated Anderson Barber and Beauty Supply, which still is operating in Oklahoma City. On October 8th, 1955, she started her 63-year love journey with Bobby Joe Padgett in Oklahoma City. Seeing as they rarely spent any time apart, they passed just 2 months and 2 days apart not being able to live without each other for very long. JoAnn graduated from the University of Kansas in 1954 with a Bachelor’s Degree in Occupational Therapy. She pledged Gamma Phi Beta sorority and enjoyed the friendships and philanthropic work. Upon graduation, she immediately moved to Norman to work in Griffin Memorial Psychiatric Hospital where she met Bob in the cafeteria line. She then held various jobs as Director of Occupational Therapy at hospitals in Houston and New Orleans. After Tracy was born, she worked for a year and decided to stay home until she got arguably her dream job, Executive Director of the Houston Tennis Association, in 1976. She then spent the greater majority of her life dedicated to tennis, but not playing like most people, volunteering. From 1976-2002 she was involved in Texas tennis is some capacity dedicating countless hours and attending countless tournaments, meeting lifelong friends along the way. Tennis conferences in nice resorts provided wonderful vacations. One of their favorites was their yearly trip to the US Open in NYC. This dedication eventually got her inducted into the Texas Tennis Sports Hall of Fame in 1998, the first inductee that was not a player. In retirement JoAnn loved spending time with family and friends above anything. Always making trips to see her beloved grandkids or hosting a party for the Cul-De-Sac in Lakeway. She was always full of life and happiness and that is the way she would want to be remembered. Thoughtful, kind, considerate, wise are the words that come to mind in describing her. Always making friends feel loved and welcome. She spent her days volunteering by counting money at the church, helping at the front desk of Lakeway City Hall, driving Seniors to appointments and serving wine and cheese at Vista Oaks assisted living. She is preceded in death by her spouse Bob Padgett, her parents and brother Orval. She is survived by her loving brother, Dale Anderson of Plano, Texas, 2 adored children Tracy and husband Brian Baggett of Mansfield, Texas, Larry and wife Jeanna Padgett of Richmond, Texas and 4 beautiful grandchildren, Trevor and wife Heather, McKenzie and soon to be husband Owen, Trenton, Tyler and numerous nieces, nephews and their children. The family wants to personally thank Tamisha and Tamika, the best caregiving duo around that poured love into MiMi and PawPaw until their final moments and treated them as their own. The family would also like to personally thank the Cul-De-Sac Neighbors that treated MiMi as their own because family goes farther than just blood. In lieu of flowers, please consider a donation to the Texas Tennis Sports Museum and Hall of Fame, 1108 S. University Parks Drive, Waco, TX 76706 or Texas Tennis and Education Foundation, 8105 Exchange Drive, Austin, TX 78754. A memorial service will be held this Friday, December 13, 2019 at 2:00 pm at Lake Travis United Methodist Church, Lakeway, TX. Her final resting place will be at the DFW National Cemetery with Bob.

JoAnn Evelyn Anderson Padgett went to be with her Lord and Savior October 18th surrounded by ones who loved her, just two months after the love of her life. She was born at home in Oklahoma City, Oklahoma on September 29th, 1932 to Basil and... View Obituary & Service Information

The family of JoAnn Evelyn Anderson Padgett created this Life Tributes page to make it easy to share your memories.

JoAnn Evelyn Anderson Padgett went to be with her Lord and Savior...