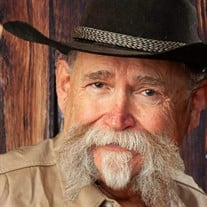 Joe Wayne Walker, of Cedar Hill – Midlothian, Texas, passed away Tuesday, March 2, 2021. Joe was a Cowboy first and foremost, a much loved husband, brother, father, grandfather and child of God. He walked God's green earth 70 years. Joe was born in Elgin, Texas, on April 6, 1950 to James Willie Walker and Johnnie Dell Copeland. His family moved to Grand Prairie, Texas in 1955. After graduating from Grand Prairie high school he married and had two children. He attended the University of Texas at Arlington. He then earned a pilot's license and flew military transport as a civilian. As a pilot he had many adventures in Alaska, Oregon, Texas and across the United States. Joe was also a Mason in the Masonic Lodge. He loved to deep sea fish and scuba dive. He enjoyed being on the ocean. He pursued a brief career as a Police Officer for the City of Cedar Hill. However, Joe’s true love was being a Cowboy. He loved the open spaces and the freedom of riding, roping and training horses. He also loved working cattle and shooting rattlesnakes. He had a flair for storytelling and tall tales. He knew how to make people smile. In the 1980’s Joe was involved in the Lake Ridge real estate development at Cedar Hill. In addition, he was part of the law enforcement division for the Texas Rangers. In 1993 he met and later married Mickey Seeton of Britton, Texas. In early 2001 they transitioned from Cedar Hill to Midlothian where he continued to work as a ranch manager for livestock and real estate. Joe loved to travel and talk of the adventures of his youth. It led to the great era of storytelling. He was often heard to elaborate on a story and then say “….To Make A Long Story Short....”. He was affectionately known as “Chief-Full-Of-Bull” by his grandchildren. Over the years he mentored many youth who came and went off of the ranch. If they weren’t family they became family. Joe had a wonderful sense of humor. He was very generous and had a kind and giving spirit. He was thoughtful and caring. Joe never met a stranger. He loved people, but avoided crowds. He will be greatly missed. Joe was preceded in death by his parents and his brother Billy Lynn Walker. Joe is survived by his loving wife Mickey Walker, Daughter Christy Lucas (husband Mike), Son Matt Walker (wife Karla), Daughter - Laura Goodson and husband Lewis, Daughter Leaha Jones; Grandchildren Leah, Paige and Luke Lucas, Katie Goodson, Naia and Banyan Jones; sister Judy Busch (husband Jerry and numerous loving nieces and nephews and Marianne Walker.

Send flowers to the Walker family.