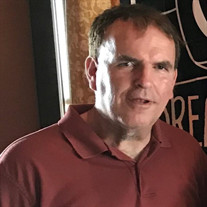 Joel Lium, 53, beloved son, brother, and friend to many, passed away on Wednesday, January 21, 2021 in Mansfield, Texas. His battle with Parkinson’s came to an end after 10 years of fighting. Joel was born in Minot, North Dakota to Larry and Adell (Guidinger) Lium. He moved to Hanover, Indiana; Jacksonville, Florida; Norman, Oklahoma; and Ellensburg, Washington as a child. He attended Ellensburg High School, graduating in 1986; and went on to attend Central Washington University, graduating in 1992, with a major in Journalism. Joel moved to Mansfield, TX in 2005 to be with his parents and his sister, Alison and her family. Joel had many interests and he loved to talk with anyone about his favorites. His sports knowledge was extensive and ask him anything about the Oklahoma Sooners, Pittsburgh Steelers, Cincinnati Reds, and Boston Celtics and you could be involved in a long conversation. He also loved music; his CD collection was immense and he liked to play DJ in his apartment for visitors. He was a real fan of 80s sitcoms and his knowledge of Pop Culture was as extensive as his knowledge of sports. He enjoyed working out, and those training sessions really helped keep the symptoms of Parkinson’s minimized. He was diagnosed with early onset Parkinson’s at age 44. He fought for almost 10 years and it was only in the last month of his life that he experienced the most terrible parts of the disease. Most notable about Joel is his kind, friendly nature. He never met an enemy. All of his interests led him to make lifelong friends who all enjoyed spending time with him doing the things he loved. Joel is preceded in death by his father, Larry in 2020; and his mother, Adell in 2013. Survivors: Sister, Alison and her husband Ron Mendelsohn and his niece, Laurin Mendelsohn; numerous Aunts and Uncles and Cousins on both the Lium side and the Guidinger side. No memorial service is currently planned. When the time comes that we can safely gather, the family of Joel will notify friends and loved ones if a service is scheduled. Donations in Joel’s name can be made to support Parkinson’s research (www.parkinson.org or www.michaeljfox.org )

Joel Lium, 53, beloved son, brother, and friend to many, passed away on Wednesday, January 21, 2021 in Mansfield, Texas. His battle with Parkinson&#8217;s came to an end after 10 years of fighting. Joel was born in Minot, North Dakota to Larry... View Obituary & Service Information

The family of Joel Lium created this Life Tributes page to make it easy to share your memories.

Send flowers to the Lium family.