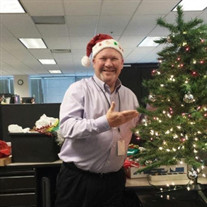 John David “J.D.” Cronkrite, 53, went to be with the Lord October 26, 2020. Born in Cleburne, Texas on March 18, 1967, he was the son of Jack C. Cronkrite and Carol Renfro Cronkrite. John David spent his early years in Fort Worth, Texas and moved to Arlington, Texas in 1971. John David attended Arlington ISD schools and was one of the first graduating classes of James Martin High School (1985). John David was a proud Martin Warrior and was part of the Warrior Football team throughout high school. John David attended the University of Texas at Arlington and was a member of Phi Delta Theta fraternity. John David made many lifelong friends within the fraternity and was a mentor to others. John David returned to university in 2007 and graduated in 2009 from the University of North Texas. John David and Sandy Martin were married on March 5, 1994 and made their home in Arlington, Texas. During this time, John David worked for Sears at the Parks Mall for 12 years. He then went on to work for Southwest Securities/Hilltop Securities for 22 years within the securities/financial industry. John David and Sandy had Ashley in 1997 and Morgan in 2001. John David loved his daughters and was very involved in all of their activities. Whether it was coaching soccer, putting hair in bows for dance or just being in the booster club, he was always there for his girls. John David loved his Dallas Cowboys, Texas Longhorns and Indy Car racing. He was a great handyman and loved to work in the yard. We were always reminded to “water the flowers and the garden”. His favorite holiday was Christmas and would compete with the neighbors on getting his decorations up first. John David is survived by his loving wife Sandy, daughters Ashley and Morgan of Arlington; parents Jack and Carol Cronkrite of Arlington; Sister and Brother in law Jaime and Jadey James of Arlington; Mother in law and Father in law Robert and Fran Martin of Austin;Brother in law and Sister in law Bryan and Jeanne Ann Martin of Cedar Park; Sister in law Kathy Martin of Iowa; nieces Jordyn, Jadyn and Jaley James of Arlington; nephew Davis Martin and nieces Beatrice and Everly Martin of Cedar Park; nieces Georgia Martin of Austin. He was preceded in death by his grandparents, Harold and Doris Renfro and Johnny and Jacqueline Cronkrite. Memorials in John David’s name can be made to the American Heart Association. John David was a friend to all and will be missed by many. He never met a stranger and would give everything he had to help someone else.