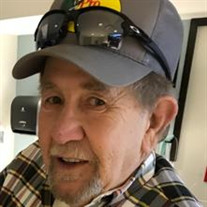 On Friday, May 8, 2020 Johnnie Evans, loving husband and father of three children, went to be with the Lord at age 72. Johnnie was born on July 27th, 1947 in Fort Worth, TX to Johnnie and Mary Cumming Evans. After graduating high school, he worked at a small auto parts store, for his father at Evans Redwood Products, and a local machine shop. In January of 1967, he enlisted in the United States Navy so he could serve his country. He served in the Navy for three years and while in Vietnam, he received two purple hearts for injuries during combat. Soon after enlistment, he married the woman that he would spend the rest of his life with. Johnnie and Shirley married on March 31, 1967 in Fort Worth, TX. They raised two daughters, Melanie and Patrice, and one son Wade. Johnnie had a passion for carpentry, which he made his career until he retired. Most people that knew him would consider him to be one of the best woodworkers around. He was also known as a “jack of all trades.” Anything that he came across he could repair whether it was carpentry, cars, plumbing, and endless other items. He was best known for his sense of humor, his compassion, his avid love of fishing, and his love for family and friends. If you needed him, he would be there no matter the circumstance. Johnnie was preceded in death by his father Johnnie, mother Mary, sister Naomi, and best friend Gary Wadkins. He is survived by his wife Shirley of Mansfield, TX, daughter Melanie and husband John Meeks of Arlington, TX, daughter Patrice Evans of Temple, TX, son Wade and wife Whitney Evans of Midlothian, TX, grandson Blake and wife Vanity Meeks, granddaughter Brittney Meeks, grandson Gavin Meeks, granddaughter Cadence Evans, grandson Wyatt Evans and extensive extended family. A funeral service will be held at 1:00 P.M. on Thursday, May 14, 2020 at Blessing Funeral Home at 401 Elm Street, Mansfield, TX 76063. ATTENDANCE WILL BE LIMITED.

The family of Johnnie Wayne Evans created this Life Tributes page to make it easy to share your memories.

Send flowers to the Evans family.