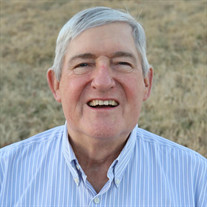 On January 28, 2022 Dr. Johnny Mac Todd went to be fully healed in heaven. We are certain he has already been assigned his heavenly job as he lived his earthly life with the most incredible work ethic and was never one to just sit idle. He was born December 8th, 1948 to James Howard and Louise Acker Todd. As the younger brother to Billy Bob the two boys had a lot of fun as only young South Texas kids can do. With a father in the Oil business they stayed busy within the Oilfield camp in which they resided and this must be where he grew his skill of never meeting a stranger and always being respectful. Later the family moved to their home in San Perlida, Texas. It was near Harlingen, Texas that he met his wife Alice Ann while at a barn dance. Married on June 5th 1970, they've danced to old country tunes for over 50 years. Alice Ann worked as a teacher, coach and cocktail waitress to support him as he embarked on his Veterinary Medicine journey at Texas A&M. Graduating with his Doctorate of Veterinary Medicine in 1973 he worked with both large and small animals and has owned multiple Veterinary practices with locations across Texas. He is the father of 3 children, Heath, James and Jenny and loved road trips with his family. Always an early riser he would wake the family before departing on a road trip at 4am with Willie Nelsons “On the Road Again” blasting thru the home speaker system. That was the cue to file into the family van for another adventure together. Anyone and everyone was always welcome in the Todd home to celebrate Christmas Eve. Dr. Todd helped in making enough food to feed the city and fully welcomed anyone who would come by. He gifted everyone, even if he didn’t know you were coming, with a pair of leather work gloves. His generosity wasn’t just extended on Christmas Eve. When he cooked he always made extra. In fact we aren’t sure if he even knows how to make a recipe that feeds less than 20 people. He made his home available to anyone at anytime. But he did expect you to chip with chores just as he expected of his own kids. Dr. Todd lived a full life serving his community, his Veterinarian employees and customers, saving countless animals, growing a large family and appreciating all he had. He was the very proud grandfather to 5 granddaughters and 1 grandson. His grandchildren, who called him ‘Papa’ saw him as the leader he was and learned that he would always make time for them when they asked to take a ride around the ranch or offering to snack on watermelon (add salt!) while watching the sunset. Dr. Todd is preceded in death by his parents James Howard and Louise Acker Todd. He is survived by his wife of 51 years, Alice Ann Todd, his children John Heath Todd and wife Meredith, James Todd and wife Alisha, and Jenny Todd; granddaughters Angelica, Elizabeth, Alex, Annie and Greenley and grandson Johnny Madison; brother Billy Bob Todd; and several nieces, nephews and a host of extended family and friends. Dr. Todd has a strong presence that will be missed and we know he is proud of the fact that he was able to work until the week he departed this earthly life. The family is incredibly grateful to both Alicia Hawkins and Amanda Glendening for all the care and assistance they have provided to him and his family over the last decade.

On January 28, 2022 Dr. Johnny Mac Todd went to be fully healed in heaven. We are certain he has already been assigned his heavenly job as he lived his earthly life with the most incredible work ethic and was never one to just sit idle. He was... View Obituary & Service Information

Send flowers to the Todd family.