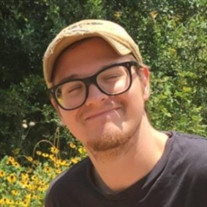 Jordan Taylor Ewing Obituary Born: Nov 7, 1995 in Amarillo TX to Jason & Angela Saltzman Ewing Died: March 23, 2021 in his home in Mansfield, TX Jordan graduated from Weatherford High School in Weatherford, OK, in 2014, where he excelled in band. He served as the percussion section line leader and earned a college scholarship to continue his musical interests. He worked in several restaurants serving as a cook and in managerial positions, as well. He always enjoyed being in the kitchen. Always a jokester, along with his dark sense of humor, Jordan had a dream of becoming a stand-up comedian. He held a deep love for his family and was always a constant rock by everyone’s side. He was preceded in death by his grandparents Jimmy Ewing of Mansfield, TX, and Milton & Trecia Saltzman of Lampasas, TX. He is survived by his parents, Jason Ewing of Azle, TX, Angela Ewing of Mansfield, TX, a brother Jadon, serving in the US Coast Guard stationed in Kodiak, Alaska, a sister, Abigail Ewing of Mansfield, Tx, his Grandmother Liby Ewing of Mansfield, TX, his grandparents Mark & Brenda Toellner of Pheonix, AZ, as well as numerous Uncles, Aunts, and cousins.

The family of Jordan Taylor Ewing created this Life Tributes page to make it easy to share your memories.

Send flowers to the Ewing family.