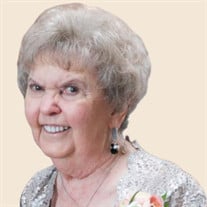 JULIA LANIER MC GOUGH, has been a resident of Mansfield, TX since 2000, and has gone home to be with her Lord and Savior, Jesus Christ on January 28. 2022. She was born October 11, 1934 in Monroe, LA. She graduated from Ouachita Parish High School in Monroe, LA and earned a Bachelor of Science degree in Business Education from Northeast Louisiana University, also in Monroe, LA. Julia also earned a Master of Science degree from Northwestern State University in Natchitoches, LA. Her greatest attribute is to Jesus Christ who became her personal Lord and Savior at the altar of The First Church of the Nazarene, Monroe, LA when she was 9 years old. Her greatest accomplishment was marrying Donald Ray McGough (Don), which immediately made her a member of one of the greatest families on earth. Her second greatest accomplishment was giving birth to a son, Edward Dwayne (Eddie), who grew up to be an outstanding Christian and a loving and gracious man that made both his parents very proud. Her parents were Christians who taught her Christian principles, good work ethics and how to deal with difficulties that came her way. They taught her how to cope with Rheumatoid arthritis from the age of five. After a three-year courtship, she married Don, the love of her life. They were married 62 years before Don went to Heaven. She was a devoted pastor’s wife and loved her family dearly. She was an insurance office employee in Monroe, LA and taught school at Columbia High and Grant Parish High School in Louisiana. She is a former member of Arlington Park Baptist Church in Arlington, TX where she sang in the choir and sang duets with Don. At the time of her death, she was a member of Victory Baptist Church of Monroe, LA and a member of the Louisiana Retired Teachers Association. Her hobbies included singing Southern gospel music with Don, sewing, gardening and cooking. She loved to encourage and inspire others and to make people happy. Julia was known by all for her grace and forgiving spirit. Her survivors are her son, Edward Dwayne, (Lisa) and three grandchildren, Maxwell Edward (Maddie), Joshua Donald and Anna Rose McGough, two step-grandchildren Caitlin Zaffater and Ahlden Klotz (Bre Drake) and one step-great grandchild, Aspen Klotz and one great grandchild, Acie Sage McGough on the way, one brother-in-law Frank McGough (Carolyn), four sisters-in-law Elizabeth Jane Lipscomb, Carol Collins (David), Effie McGough, Betty Sue Barnes (Hartwell) and many nieces and nephews. She was preceded in death by her husband Donald Ray McGough, his parents Aubrey Duke and Ruby Miller McGough, her parents William E. (Jack) and Nealie St. John Lanier, brother James Arthur Lanier, brothers-in-law Monte (Jessie Lee) McGough. Charles (Betty Jean) McGough, Jimmy McGough, Tommy Lipscomb, sisters-in-law Rita McGough and Patricia Hutson (Johnny).

JULIA LANIER MC GOUGH, has been a resident of Mansfield, TX since 2000, and has gone home to be with her Lord and Savior, Jesus Christ on January 28. 2022. She was born October 11, 1934 in Monroe, LA. She graduated from Ouachita Parish High... View Obituary & Service Information

The family of Julia Lanier McGough created this Life Tributes page to make it easy to share your memories.

JULIA LANIER MC GOUGH, has been a resident of Mansfield, TX since...

Send flowers to the McGough family.