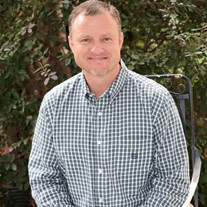 Kelly John David passed away Friday, November 5, 2021, in Mansfield, Texas at the age of 50. Kelly was born on January 17, 1971, in Gainesville, Texas to John David and Deborah Cawthorn. He was raised in Pilot Point, Texas and had five siblings, Andrea, Dawn, Chad, Chris, and Jennifer. Kelly attended Pilot Point and Seagoville high school and later attended UTI trade school where he earned his associates in automotive. He landed his first job at Fire Stone in Grand Prairie. Through the years he moved to different Ford houses throughout the metroplex and finished his career at Five Star Ford in North Richland Hills completing 33 years of service as a senior master level diesel technician. Kelly met the love of his life on a blind date at the Kennedale Raceway in 1992 and they never turned back. Kelly and Stacy Lynn Seeton married in June of 1994 and celebrated 27 years of marriage. Together they had two children, Kelsey and Ty, to complete their perfect family. Kelly accomplished a lot during the short time he was here. He was a volunteer fire fighter in Nacogdoches and in Rendon for a few years in his early 20’s. He became a member of the Mansfield Church of Christ after marrying Stacy and moving to Mansfield. In 2010, he was one of five diesel technicians in the nation that was asked to be a part of the 6.7 New Model Release Committee and was flown to the Kentucky Ford Truck Plant where he was able to get his hands on the new Ford diesel engine. He was there for about a week taking classes and seeing all the components of the new engine prior to it being released in the dealerships nationwide. This was a huge honor and highlight in his career. He had many hobbies that mostly included outdoor activities like hunting, riding ATVs, and fixing anything he could get his hands on. Kelly was a hardworking man and enjoyed working on things for fun. He loved cutting firewood, fixing fences, and working on his tractors while teaching his kids through the process. He always made time and found teaching opportunities for whoever was around him because sharing his knowledge was important to him. Kelly was a very well-respected man and is known for his kindness, work ethic, and character. He was very passionate about integrity and teaching his kids and the others around him about the importance of always doing the right thing and leaving things better than the way you found them. He always kept his belongings tidy and organized. Disorganization was chaos to him and after spending time with him that was something you learned quickly. He was very genuine and always encouraged people to put their best foot forward and to lead by example. When he spoke people listened and always took heed to what he said because you knew he would never stray you in the wrong direction. Kelly was avid about being honest and always doing the right thing even when the right decision was a difficult one. He was someone that was wise and full of wisdom even though he did not have too many years behind him. Kelly was a kind and loving husband and a devoted father who always put his family first. He loved being able to support his family in any way he could and strived to make sure his kids had everything he did not have while growing up. He had a very serious demeanor that could be intimidating at first but underneath that he was a very funny and compassionate man. He loved spending time with family and friends and always wanted to be outdoors. Our hearts are broken, and our lives will never be the same without him, but he is without a doubt looking down on his family and friends with a smile. Kelly was preceded in death by his father John David. Kelly is survived by his loving wife, Stacy; daughter, Kelsey and husband Samuel Butler; son, Ty; mother, Deborah Cawthorn; sister, Andrea Myers and family; brother, Chad David and family; sister, Dawn Meloed and family; brother, Chris David and family; sister Jennifer Poe and family.

Kelly John David passed away Friday, November 5, 2021, in Mansfield, Texas at the age of 50. Kelly was born on January 17, 1971, in Gainesville, Texas to John David and Deborah Cawthorn. He was raised in Pilot Point, Texas and had five siblings,... View Obituary & Service Information

The family of Kelly John David created this Life Tributes page to make it easy to share your memories.

Send flowers to the David family.