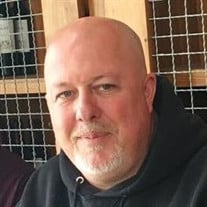 Kevin Keith Osborne 48 of Mansfield, Texas, died unexpectedly in his sleep Tuesday August 20th, 2019. Kevin was born December 10, 1970 to Johnny and Brenda, soon to follow was his little brother Chris. The bond between Kevin and Chris is one that will go down in the history books. The constant arguments of “you are Mom’s favorite.” will forever provide great memories. Kevin was one to always try to one up his little brother just a little bit, but would be the first one there to defend him and support him in any way. The summers when school was out their home was filled with friends and antics only boys could do, from setting fireworks off in the house, from convincing people to jump into the pool from the rooftop of the house and calling their mother Brenda over and over to tattle on each other. It is surprising that Kevin and Chris made it through those years. Kevin excelled in basketball at Crowely High School, and also was known to provide some great entertainment at the high school talent shows with this amazing ability to rap and freestyle. If you called Kevin in high school you were likely to get his answering machine and be treated to one of his many freestyle raps he created. He was known around high school as the guy that everyone liked and always nice to everyone. Never met a stranger and always made everyone feel they were a friend. Kevin had two biological children a daughter, Jordan Anderson and son Brandon Jodzko. He and his son Brandon and he both shared a love of online gaming. Kevin enjoyed going to TCU football games with his stepfather Ray Sour’s whom Kevin considered to be the man that raised him. Kevin and Ray would always be able to sit and discuss any type of sport and had a great bond. Once Kevin became a stepfather the appreciation Kevin had for Ray grew even more and often said Ray helped make me the stepfather he was and was grateful for that. Kevin met Tawny December 2011 and in December 2012, he proposed to her having Tawny’s daughter Sydney help when he asked her to marry him. Kevin had asked Sydney before hand if it would be OK if he married her mommy and Sydney said yes. January 19, 2013, Kevin and Tawny were married and Kevin even wrote vows he read to Sydney as well. Of all the things Kevin excelled in life, the thing he excelled at the best was being Sydney’s stepfather. He was the best stepfather to Sydney anyone could have ever picked. He loved her from the first day as his own and expected the best from her, but when she fell, he was the first to pick her up. Sydney would be frustrated with the expectations he put on her, but he knew her potential. Family functions were always an exciting time for Kevin and the family, the annual Christmas and 4th of July gatherings at his cousin Eric’s house. Food, family, and laughter were filled with stories of he and his cousins antics while growing up and new stories of their kids and all their adventures into parenthood. Kevin worked at O’Rourke Petroleum in Ft. Worth, Texas, Kevin took pride in a job well done. He worked in the safety department and always was one to guide and advise. He was known for his writing and amazing organizational skills. He took OCD to another level and it showed in his work, but he was a great person to work with, friendly and personable. Always one that someone could stop in and talk to, he made you feel like you mattered. Kevin is survived by his wife Tawny Osborne, step daughter, Sydney Fraser, mother Brenda Sours, step father Ray Sours, his brother Chris Osborne, maternal grandmother LaTrica Martin, aunt Gayla Hensley, and many beloved cousins and friends. Kevin was preceded in death by his father Johnny Osborne, paternal grandfather William Charles Martin, fraternal step grandparents Lyle and Betty Sours, uncle Duane Martin, and cousin Myste Morris. Kevin will be greatly missed by so many, but has passed on to a greater place. Take comfort in knowing that Kevin has reached the Promised Land, he will forever be in Peace. He was welcomed with open arms. Our days may be sad but remember the good times with him he would only want that of all of us. He was a comic, a hard worker, a son, a brother, a husband, a father, a friend, and loved by so many. Thank you Kevin for sharing yourself with us, we were changed by you and we will forever carry a piece of you forever in our hearts. Until we meet again.

Kevin Keith Osborne 48 of Mansfield, Texas, died unexpectedly in his sleep Tuesday August 20th, 2019. Kevin was born December 10, 1970 to Johnny and Brenda, soon to follow was his little brother Chris. The bond between Kevin and Chris is... View Obituary & Service Information

The family of Kevin Keith Osborne created this Life Tributes page to make it easy to share your memories.

Send flowers to the Osborne family.