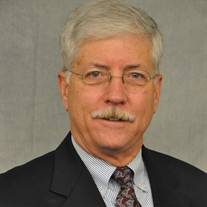 Kriss Michael Kennedy, 60, passed away September 22, 2019 in Mansfield, TX surrounded by loved ones. Kriss was born March 30, 1959 in El Paso, Texas to Bruce and Linda (Wilson) Kennedy. Kriss’s journey to public service can be traced to his youth, where as a member of the Boy Scouts of America he achieved the rank of Eagle Scout in 1976. After graduating from Parkland High School in El Paso, Texas in 1977, Kriss graduated from the United States Naval Academy, class of 1981, and continued to proudly and honorably serve our country as a nuclear-qualified submarine officer in the United States Navy until 1988. He then served in the United States Navy Reserve from 1988 until retiring as a Captain in 2009. In 1988, Kriss began his career with the Nuclear Regulatory Commission as an Operator Licensing Examiner and reached Regional Administrator before his retirement in 2018. Kriss was a recipient of the prestigious Presidential Rank Meritorious Executive Award in 2015. Kriss’s community involvement included the Boy Scouts of America and guided his two sons to also achieve the rank of Eagle Scout. He participated in Band Boosters, and the PTA at Mansfield and Summit High School and was a member of the First United Methodist Church in Mansfield, Texas. He enjoyed fishing, photography, was an excellent grill-master, and was always prepared to tell a great “Dad” joke. Kriss married his high school sweetheart Ellen Davis. They married in 1981, and over the next 38 years, enjoyed a life full of love and devotion that brought Kriss three children and made him a very proud grandfather to seven grandchildren. Throughout Kriss’s life, he was able to foster plentiful and lasting friendships across the country. Kriss is survived by his parents, Bruce and Linda (Wilson) Kennedy; wife Ellen (Davis) Kennedy; son Adam Kennedy and wife Christiana and grandchildren Lawrence, Adalynn, and Owen; son Brian Kennedy and wife Caitlin and grandchildren Cooper and Quinn; and daughter Allison (Kennedy) Casey and husband Kyle and grandchildren Nora and Sophie; brothers Kevin Kennedy, Keith Kennedy, and Craig Kennedy; and numerous nieces and nephews. In lieu of flowers, memorials can be made to the following charities that greatly impacted Kriss and his family: ZERO The End of Prostate Cancer Zero is an organization that connects men and their families who have been diagnosed with resources to support them through logistics, emotional support, financials etc. Last year Kriss and his family participated in the DFW 5k run and raised over $1,000 in donations. https://support.zerocancer.org/site/Donation2?1640.donation=form1&df_id=1640&utm_source=Luminate&utm_medium=Donation&utm_campaign=ZERO+-+PCAM&utm_content=Closed&utm_term=redirect&s_src=Luminate+Donation&s_subsrc=PCAM+2019+general&AddInterest=1083 LIVESTRONG Earlier this year, Kriss completed a 12 week LIVESTRONG program out of his local YMCA. This group-based workout program focused on strength and cardio. He absolutely loved the time he spent with this program, and was inspired by the fellow members of his class. Donation Link: https://gifts.mdanderson.org/Default.aspx?tsid=10503&noamt=true&chosen=100&intcmpid=mdaccorg_donate MDA / UT Southwestern: Kriss received world class care from 2 top cancer research centers: At MD Anderson, Kriss received treatment from the Genitourinary Cancer Center. Donation Link: https://gifts.mdanderson.org/Default.aspx?tsid=10503&noamt=true&chosen=100&intcmpid=mdaccorg_donate At UT Southwestern, he received treatment from the Simmons Cancer Center. Donation Link: https://engage.utsouthwestern.edu/donate-now

The family of Kriss Michael Kennedy created this Life Tributes page to make it easy to share your memories.

Send flowers to the Kennedy family.