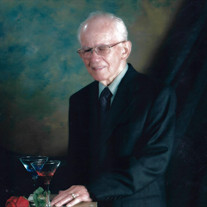 Lee Kratzer, 92, went home to his Heavenly Father on July 23, 2019, surrounded by his loving family, in Arlington. Lee was born to William and Clarice (Crochet) Kratzer on November 30, 1926 in Jennings, Louisiana. Early in his career he worked as a bookkeeper, and then later attended an auto repair school that prepared him to become an auto mechanic. He was a manager of 5 service stations for approximately 6 years. Later he and his family moved from Baton Rouge to Roanoke, where he went to work at Ziegler shipyard as a diesel mechanic. After several years he and his wife Helen opened a convenience store and a mechanic shop on their property and worked in their businesses until they retired. In the fall of 1948, Lee went on a blind, double-date and met Helen Rachel. That meeting sparked a relationship that would lead to a marriage that endured 70 years. Without a doubt, Helen was the love of Lee’s life. Lee was a domino master and would beat his opponent nearly every time. He enjoyed traveling, dancing, cooking barbeque and his beloved New Orleans Saints. Lee also enjoyed gardening, telling jokes but truly loved his family and his Heavenly Father. He loved his Catholic faith, attending Our Lady of Seven Dolors where he would serve his parish as a Eucharistic minister and usher for over 30 years. Lee is preceded in death by his parents and sister Bertha Broussard. Lee is survived by his wife of 70 years, Helen, Brother Wesley Kratzer, son Michael Kratzer and his companion Dianne Marquez, and son Thomas Kratzer and his wife Connie. His grandchildren Kevin Kratzer and his wife Tiffany, Casey Kratzer, Christine Kratzer Hartman, and Melanie McClendon and her husband Deacon, as well as great-grandson Taylor, and great-granddaughters Kayla, Rachel, and Alex. Lee was a very sweet and gentle man. Having get-togethers, inviting people over visiting, and having a good time, were just some of the things he enjoyed. He loved having an audience around to share his many jokes with. Making people laugh made his day. His love for Helen was very special from the beginning. Not only was she his wife, she was his best friend for 70 years. The love and patience he showed in raising his sons is evident in the men they have grown into. Lee was a man with a sweet and gentle spirit and will be in our hearts forever.

Lee Kratzer, 92, went home to his Heavenly Father on July 23, 2019, surrounded by his loving family, in Arlington. Lee was born to William and Clarice (Crochet) Kratzer on November 30, 1926 in Jennings, Louisiana. Early in his career he worked... View Obituary & Service Information

The family of Lee R. Kratzer created this Life Tributes page to make it easy to share your memories.

Send flowers to the Kratzer family.