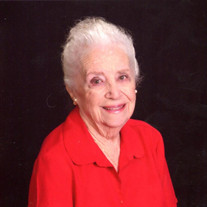 Lois Knickerbocker, a resident of Everman, Texas passed away February 23 2021. She was born April 12th 1921. Survived by her three children. Her sons Tony Clark and wife Debbie, Harold Clark and wife Debbie, her daughter Alice Turner and her husband Bill. Grandchildren, Michael, Beth, Alisha, Kevin, Ben, Kim, Katie, Amy and Angie. 21 great grandchildren, 11 great great grandchildren and sister in law, Kay Knickerbocker. She was preceded in death by her husband, James L. “Nick” Knickerbocker, son, Doug Clark and great grandson Josh Kent. She was a loving wife/mom/and Nanny. If she could, she would help those who needed financial help. We all knew, if we needed her at any time day or not she would get in the car and drive to us. Mom drove her car which was a Mustang until age 92. She was a strong loving woman! We will all miss her dearly! She worked two jobs in order to take care of her four children. In 1953 She was hired by L. T. V. which later the name changed to Vought. She retired after working 25 years for the Vought Industry. She started attending the Tarrant county junior college at South campus taking senior classes such as swimming, history, psychology. She started teaching how to play the game of 42 with dominoes. She substituted for the history and psychology teacher whenever they couldn't be there. Later mom decided to go to the Arlington campus and there she became extremely active. She first took over the job of getting the end of the semester party ready which she called The Bash. She set the date for the party, she planned the menu, she booked the entertainment and she got donations donated for the door prizes. She did this for many years. Later she became a board member of the senior classes. She was over the curriculum and getting the professors or teachers to teach the classes. She helped put the catalogs together and mailed them out, and continue to teach the game of 42. In the summer she was very involved in getting the talented and gifted children to the classes that they needed to attend for the program. She was a world traveler. She sponsored the Texas girls' choir, as they traveled to China and to Russia. She traveled to Hawaii, and to Europe. She had many vacations in the United States. She loved watching and going to the Texas Rangers baseball games. She also was very involved in her granddaughter's fastpitch softball team "Blue Thunder.' She was the go-to Nanny whenever any other players were hurt. She also was a former board member of Everman parks and recreation. The last five and a half years of her life she lived in the assistant living facility The Covenant. In Burleson. She loved all the caregivers and all the caregivers loved her. They all called her Nanny. Many people call her Nanny, friend, Lois and mom. She was greatly loved. Watch Live Stream of the service at https://www.facebook.com/groups/276640060510108/?ref=share

The family of Lois Ruth Knickerbocker created this Life Tributes page to make it easy to share your memories.

Lois Knickerbocker, a resident of Everman, Texas passed away...

Send flowers to the Knickerbocker family.