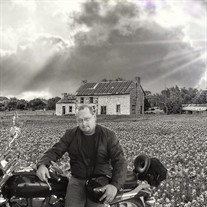 Lonnie Daniel Taylor, “Pop”, 54, of Alvarado, Texas, passed away Sunday, October 24th. He was born in Dallas, Texas on August 9th, 1967, and was married to Kimberly Lynn Taylor on October 20th, 2001 in Alvarado, Texas. Pop had a career in Diesel Mechanics forever! He was a member of Teamsters and the Teamsters Motorcycle Club and had a passion for his family, grandbabies, archery, motorcycles, his dog, Angel, reese’s, and don’t forget about his blue bell! Lonnie is preceded in death by his Grandmother, Syble. He is survived by his Wife, Kimberly; his Mother, Mary; Children, Kevin and his Wife, Ginann, Derek and his wife, Brittany, Breeana AKA “Baby Girl” and her husband, Ethan, Dalton, Colton and Taryn AKA “Lil Bit”; Grandchildren, Cash, Sophie, Cruz, Grayson, Kylor, and Memphis; Sister, Donna and her husband, Michael, Brother Michael and his wife, Morgan.

The family of Lonnie Daniel Taylor created this Life Tributes page to make it easy to share your memories.

Send flowers to the Taylor family.