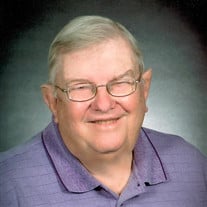 Louin Berry III was born in Fort Worth, Texas, and passed away in the comfort of his own home in Mansfield, Texas at the age of 84 years, 361 days, following a two-month journey with pancreatic cancer. He is survived by his wife, Barbara Lewie Berry; two sons, Mike and Mark, a daughter Kimberley Lindsey and her husband, Mikel; four grandchildren, Danielle Bobe and her husband, Randy; Joseph Louin Berry; Morgan Lindsey, and Avery Lindsey; two great-grandsons, Brayden and Dalton Bobe. He is also survived by sister-in-love, Allee Lewie; five nieces and one nephew. Louin grew up on Lake Worth and was a proud graduate of North Side High School, class of 1954. He attended Texas Wesleyan College and transferred to McMurry University in Abilene where he majored in History and Philosophy. He attended Perkins School of Theology in Dallas. Louin and Barbara met in 1954 when each was awarded a scholarship to attend summer Speech-Drama classes at Texas Christian University. They played opposite each other in the production, StageDoor. Married on September 28, 1956, they looked forward to celebrating their 64th anniversary this year. Louin spent twelve years in the Methodist ministry serving churches in DeLeon, Wingate, Novice, Blanket, Waco and Fort Worth. He later made a career change. He retired from Loral Corporation after 25 years in Financial Management. Louin and Barbara spent their retirement years traveling and playing golf and competing in couple’s tournaments where they met many wonderful friends. Louin was a member of First Methodist Church Mansfield where he served in many leadership positions and as a Lay Minister. He held memberships in Poetry Society of Texas and Poets of Tarrant County where he served as Chaplain. He was a member of Walnut Creek Country Club for 45 years and served as President of the Retired Men’s Golf Association. He also coached youth sports when he was a member of Arlington Optimists. His influence was bestowed upon Victoria and John McCallum and Trevor and Trenton Baggett, all of whom he watched grow from childhood into successful adults. Waiting to welcome him into Heaven were his father, Louin Berry, Jr. and first grandson, Michael John Berry, Jr. along with a host of family and friends. Louin Berry III was a man of great faith and loved to read and study the Bible and share his faith with others. Memorials may be made to First Methodist Mansfield Building Fund or to Methodist Children’s Home in Waco, Texas. Due to Covid-19, the family will gather in the First Methodist Mansfield Chapel for a private memorial service. Anyone can watch the service live at this link. Burial will be in the Berry Family Plot at Mt Olivet Cemetery in Fort Worth. https://vimeo.com/456710355/005111ec2f

Louin Berry III was born in Fort Worth, Texas, and passed away in the comfort of his own home in Mansfield, Texas at the age of 84 years, 361 days, following a two-month journey with pancreatic cancer. He is survived by his wife, Barbara Lewie... View Obituary & Service Information

The family of Louin Berry III created this Life Tributes page to make it easy to share your memories.

Louin Berry III was born in Fort Worth, Texas, and passed away...

Send flowers to the Berry family.