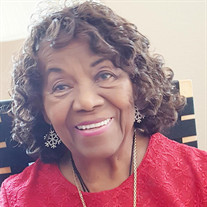 “I have fought a good fight, I have finished my course, I have kept the faith” (2Tim 4:7 KJV) Mabel Constance “Consie” Card was born on September 5, 1928 in Belize City, Belize, Central America, to the late Morrell and Florine Staine. On May 31st she was called to her heavenly resting place. She was the fourth of seven children preceded in death by her husband Eric, her daughter Myrna Louise and son-in-law Ricky brothers Bernard and Jorge and sisters Evangeline “Bonnie” and Anna Dionicia. Mabel received her early education at Saint Catherine’s Academy in Belize City, and she graduated from Belize Teacher’s College with a degree in Education. Mabel loved children as she enjoyed teaching at Ebenezer, Wesley, and Sittee River Methodist schools for many years in Belize. Years later she is still fondly called “Teacher” by many of her previous students. Belizean legendary musicians Gerald “Lord” Rhaburn and Pablo Clarke credit Teacher for being influential early on in life. She instilled discipline and dedication. Mabel was a sweet, fun loving, career minded, caring woman full of wisdom to share with those who asked. She accepted Christ at an early age and remained a devoted Christian. She taught Sunday School for many years at the Hempstead Methodist Church. Mabel was a faithful and active member of the United Methodist Church (Hempstead- NY, Palm Coast-FL, and Mansfield-TX) where she made many friends and participated in various church groups and activities through the years. On September 1, 1951 Mabel married her childhood sweetheart, Eric Leopold Card, they were married for 56 years. Seeking greater opportunities, Eric moved to New York and soon after, Mabel followed with their two children, Eric Anthony and Myrna Louise. They established residency in Brooklyn, New York and welcomed their third child, Erette Mabel. They bought their first home on Snediker Ave. in Brooklyn, NY. The couple was instrumental in assisting many Belizeans and anyone in need of help, many of whom called Snediker home. Later, the family moved to Hempstead, New York where their fourth child, Donna Marie was born. The home Mabel created was full of love, warmth, happiness, and joy. So many people recount the good times, wonderful food, laughter, and great memories when they recall 100 Long Beach Road. Mabel loved hosting parties and get-togethers and was truly the hostess with the most-est. Mabel (Consie) was a very strong willed, independent woman. She was funny, out-going, elegant, intelligent, social, a sharp tongue, witty and loved people. She has passed down that sense of independence to her children and grandchildren. Mabel worked for New York Telephone in the computer room. She was our own “Hidden Figure” as she was one of the first Black women managers in the Computer Room in Massapequa NY, where she was trained in computer languages such as Cobalt and Fortran. Mabel retired from the NY Telephone Company in 1991. Once retired, Mabel and Eric moved to Palm Coast, Florida. They enjoyed each other, retirement, and life. Their children, grandchildren, and great-grandchildren spent many summers and holidays with them. Mabel enjoyed taking the family to tourist attractions, amusement parks, the beach, and relaxing in the pool. Baking cookies, cakes and pies was her art. She enjoyed baking sweets and goodies for her grandchildren, singing songs, spending time with family, loved playing games, having desert, decorating her home for Christmas, and loved to worship the Lord. In 2007, Mabel and Eric joined their daughter Erette in Mansfield, Texas. They were married for 56 years until Eric’s passing on November 19, 2007. Mabel continued her devoted worship with the United Methodist Church and a member of the Sonshine Circle. She was an active member at the local Senior Center of Mansfield where she participated in the Senior Choir as she enjoyed spending time with many friends. Mabel enjoyed being pampered by getting her hair styled and nails manicured. She was quite the glamour girl, stylish and a fantastic matriarch. Mabel had many friends and her spirit was loved by all. She leaves to cherish one son Eric Anthony and wife Gail and daughter’s Erette Mabel, Donna Marie and husband Kym, Yvette Bernadette and daughter-in-law Debbie Card. Three siblings; Aljam, Leotine, and Olsen. Sixteen grandchildren; Bernard (Carlton), Rickey, Charles, Aaron, Ashley, Aatiya, Brandon, Ariana, Chaz, Malik, Rayvon, Ameer, Ariyah, Dabriya, Rhea, and Ivri. Fourteen great-grandchildren and a host of nieces, nephews, cousins, family and friends that were very dear to her. Consie you are forever in our hearts! A service was held on June 8, 2020 at Blessing Funeral Home in Mansfield, Texas. A recording of Mabel Constance (Staine) Card's Celebration of Life will be viewable here: https://video.ibm.com/channel/23866912/video/Card

“I have fought a good fight, I have finished my course,
I have...