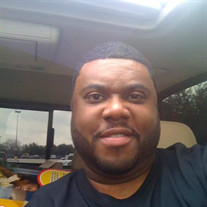 Margene “Geno” Simmons passed onto heaven November 5, 2019 and is now with Jesus, his dad, grandparents and many other family members. Margene Euquece Simmons was the second of two children born to Rickie and Denice Simmons on August 3, 1972, in Fort Worth Texas. Margene was educated in the Arlington ISD having attended Wimbish and Roquemore Elementary, Nichols and Shackleford Junior High and then graduating from Lamar High School, the fighting Vikings. He was a proud part of the Viking football team. Upon his graduation from High School, Margene enrolled at Cisco Junior College where he played football. He then enrolled at East Texas State University (ETSU), currently Texas A&M- Commerce where he played football. He met his wife, Rachel while at ETSU. Upon graduation Margene and Rachel married in Mansfield Texas. They moved to Waco, Texas where Margene worked for the Texas Youth Commission. Then they moved to Grand Prairie, Texas where he worked as a juvenile probation officer. He then started teaching and coaching football for Arlington ISD at Seguin High School. They have resided in Mansfield, Texas for the last 13 years where Margene finally started the career he was destined to do, Construction Management. He quickly excelled and started his own business. Margene was always making people laugh and smile. The way he entered a room, made everyone stop and look. Margene loved his friends deeply and always took the extra time to contact them regularly or stop to see them. Margene had a heart of gold. He didn’t just have friends; he kept his friends close to his heart. Margene is survived by his wife Rachel Simmons, his boys, Hunter, Aidan and Riley Simmons; his mother Denice Simmons, brothers Demetrius Simmons (Nicole), Terrence Simmons (Tina), Rayland Simmons (Trina) and Jason Simmons, sisters Soria Lyons (Virgil) and Nikki McDaniel (Eric), great-aunt Romy Webb, great uncle Bernard Britton, aunts Rechetta Greer and Laura Johnson, uncle Dennis Johnson and a host of cousins, nieces and nephews as well as many dear friends Margene considered family.

Margene &#8220;Geno&#8221; Simmons passed onto heaven November 5, 2019 and is now with Jesus, his dad, grandparents and many other family members. Margene Euquece Simmons was the second of two children born to Rickie and Denice Simmons on August... View Obituary & Service Information

The family of Margene Euquece Simmons created this Life Tributes page to make it easy to share your memories.

Send flowers to the Simmons family.