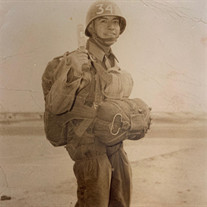 Mario Muro Arellano, loving husband and father, returned to live with our Savior on Sunday, October 20, 2019 in Arlington, Texas at the age of 86. He passed away peacefully surrounded by family and Lorena, his "penca de oro" and wife of 43 years, by his side. Funeral Service: 9:30 a.m. Thursday at Living Church in Mansfield. Interment: 11:15 a.m. Thursday at Dallas Fort Worth National Cemetery. Visitation: 4 p.m. to 6 p.m. Wednesday at Blessing Funeral Home in Mansfield. Mario was born on March 25, 1933 in Ciudad Juarez, Mexico to Bernabe and Soledad Arellano. Mario was devoted to a life of selfless service and live out his passion as a Soldier, a Sailor, a professor, a missionary, and a pastor. He served in the United States Army from September 19, 1955 to August 13, 1958. He then served on active duty in the United States Navy from February 17, 1959 to July 19, 1976. Mario retired as a Chief Petty Officer from the Navy after 29 years of total military service. he was a devout patriot who loved God and his country. Mario became a Christian in his youth and dedicated his retirement years to ministering the gospel throughout Spain, Mexico and the United States. Mario spoke passionately about the grace of God over his own life and proclaimed the good news of the gospel until his last breath. Mario had a gift for music and was a talented composer, singer and guitarist. He loved writing poetry, studying the bible and watching soccer. Mario also valued professional development and education. Mario is preceded in death by his parents Bernabne and Soledad Arellano, and his brother Jesus Arellano. Mario is survived by his two sisters Graciela Gonzalez, and Maria Arellano De Silva, his wife of 43 years, Lorenza Ramirez Arellano, and his five children, Frances Atkins (husband Luke), Marta Webster (husband Norman), Obed "Obie" Arellano (wife Kim), Abdiel "Ben" Arellano (wife Shaina) and Rachel Baba (husband Truston). He has nine grandchildren: Josh and Chris Webster, Trey Atkins and Tiffany Moran, Obie and Arrow Arellano, Lily and Titus Baba, Emilia Arellano and several great-grandchildren.

Mario Muro Arellano, loving husband and father, returned to live with our Savior on Sunday, October 20, 2019 in Arlington, Texas at the age of 86. He passed away peacefully surrounded by family and Lorena, his "penca de oro" and wife of 43... View Obituary & Service Information

The family of Mario M. Arellano created this Life Tributes page to make it easy to share your memories.

Send flowers to the Arellano family.