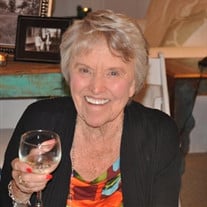 Marjorie Jewell Brentlinger passed away Tuesday October 2nd 2018 at the age of 96. She was comforted in her daughter’s home as she was ushered to heaven. Marjorie’s family, friends, and loved ones were the constants of her life. She epitomized the term matriarch, always bringing love and compassion to her family and friends. As those that were blessed to call Marge, Mom, Grandma, or Friend, would all agree: she never once knew a stranger, an awkward moment, or party she didn’t want to attend. She brought a passion and energy that few possess to each and every relationship she had, each endeavor she undertook, and to the legacy we now celebrate. Marjorie was born to Arthur and Gertrude Jewell on January 29, 1922 and was the second of three children. She grew up on her father’s farm just outside of Centerburg, Ohio, called Idle Ease Farm. As Marjorie grew, she spread her wings and at the age of 18, she chose to attend Tarleton State, a preparatory school for women in Stephenville, TX. After Tarleton, she attended Ohio Wesleyan University, fell in love with the star halfback of the football team, and became Homecoming and Queen to his King Later they married. In 1941, Brent found himself in the Army Air Corps; Marjorie found herself married to a flight navigator. After the war, Marjorie and Brent finished their educations at Ohio State University, where Brent finished his medical degree. During this time, Marjorie gave birth to their first child, Tony. In typical Marjorie fashion, she, Brent and Tony went on an adventure. They piled into a station wagon with Bernie and Hazel Mycoskie and Paul and Zora Bontley and headed to Texas. As the medical practice Brent shared with Dr. B.J. Mycoskie and Dr. Paul Bontley began to flourish, so did Marge and Brent’s family with the addition of Gary, Terri, and Bobby. When their fifth child, Billy, came along, it became apparent the young couple needed more space and it was time to move. Marjorie and Brent took the family to their country home and never left. The new home—called simply “The Farm”—influenced Marge as much as she shaped it. After losing her husband, Marjorie created her own business, Brentlinger Farms. The business welcomed people for formal occasions, meetings, and weddings. She ensured that meetings and weddings went off without a hitch. She ran the business until she chose finally to retire, near her 90th year. The breadth of Marjorie’s influence on this world cannot be quantified. Her influence shall go on. She was involved in raising 16 grandchildren, 26 great grandchildren, and their friends. She founded a book club, called the Chalupa Club that was comprised of life long friends and experiences that continued through her final days. For more than half a century, Marjorie lived on Brentlinger Farm. She became an entrepreneur because of the Farm. She raised her family on the Farm. She became a matriarch on the Farm. Marjorie traveled; she loved her family; and now, she yearns for home. Marjorie Brentlinger is survived by many. She is survived by her brother, Jon Jewell and her own children: Tony, Gary, Terri, Bobby, and Billy. From Tony, she is survived by his three children and four grandchildren. From Gary, she is survived by his three children and five grandchildren. From Terri, she is survived by her four children and eleven grandchildren. From Bobby, she is survived by his three children and eight grandchildren. And from Billy, she is survived by his two children. She was preceded in death by her husband, R.W. Brentlinger, and by her sister, Josephine Gantt.

Marjorie Jewell Brentlinger passed away Tuesday October 2nd 2018 at the age of 96. She was comforted in her daughter&#8217;s home as she was ushered to heaven. Marjorie&#8217;s family, friends, and loved ones were the constants of her life.... View Obituary & Service Information

The family of Marjorie Jewell Brentlinger created this Life Tributes page to make it easy to share your memories.

Send flowers to the Brentlinger family.