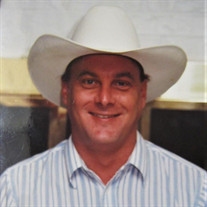 Mark Vincent Hunstable On Saturday, May 9, 2020 Mark Hunstable passed away peacefully in Mansfield, Texas at the age of 61. Mark had been fighting lung cancer for several years and had recently made the decision to go on hospice. Mark was born in Dallas, Texas on 12/12/1958 to Fred and Juanita Hunstable. He spent his life in Arlington, Texas attending St. Maria Goretti Catholic School, Nolan Catholic High School and graduated from Arlington High School in 1977. Mark was a man of many layers. In his younger years, he enjoyed fishing, being outdoors, and was a hard worker. He could be funny, personable, and was always up for a good time. He loved being the “hero” and had many stories of his experiences. Mark thought of himself as a scientist and his life’s goal was to figure out ways to solve some of the world’s problems. He loved music and two of the greatest joys in his life were playing the guitar and singing Garth Brook’s songs. Stevie Nicks was always his favorite singer and, later in life, this would have significant meaning to him. Mark could make friends anywhere he went. At his best - he had a good heart and a kind soul. Mark also had other layers he fought throughout most of his life: mental health challenges, addiction and physical pain. The family is grateful that now his pain is gone and his brain and body are healed forever. Mark was preceded in death by his father, Fred M. Hunstable, brother-in-law Rick, niece Christina, and nephew Hayden. He is lovingly remembered by his mother, Juanita J. Hunstable, nine siblings and their spouses and many special nieces and nephews: Fred, Steve, Paul, Nita, Eric, Kathy, Greg, Amy, and Patrick. Mark’s daughter, Rachael Hawkins-DeBeauchamp, was a special blessing during a time when he needed her most. Mark has a large number of aunts, uncles, cousins, and other family members both on earth praying for him and those that have gone before to welcome him. In lieu of flowers, the family wishes donations to Hayden’s Corner at www.haydenscorner.org or any other mental health organization that may have special meaning. A small private celebration of life will be held at some time in the future. If you smoke, please quit. If you, or someone you love, is struggling with a chemical dependency or a mental health issue, please seek support and help. It’s never too late, until it’s too late. #conversationsmatter

Mark Vincent Hunstable On Saturday, May 9, 2020 Mark Hunstable passed away peacefully in Mansfield, Texas at the age of 61. Mark had been fighting lung cancer for several years and had recently made the decision to go on hospice. Mark was... View Obituary & Service Information

The family of Mark Vincent Hunstable created this Life Tributes page to make it easy to share your memories.

Send flowers to the Hunstable family.