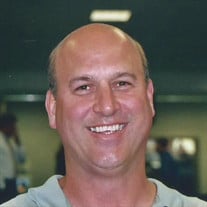 Mark Edward Moody, 61, passed away peacefully July 18, 2020 in Arlington, Texas. Mark was born to Bert and Reeci Moody on November 17, 1958 in Dallas, Texas. He graduated from Sam Houston High School in 1977. He played basketball at Dallas Baptist University and went on to graduate from Oklahoma University. Mark was baptized into his Christian faith at the age of 24, at Hillcrest Park Baptist Church, where he later married his wife. Mark and Carolyn started and ran their own military defense contracting company from 1981 until shortly after Mark’s diagnosis of ALS. Mark was a great athlete and played numerous sports in his youth and throughout college. As an adult he played men’s basketball and softball, where he made genuine lifelong friendships. Mark had a vast knowledge of the fundamentals of basketball and went on to coach his 3 children, even becoming head coach of some of their teams. Mark loved photography and rarely encountered a moment not worth capturing. Some of Marks other hobbies were gardening, antiquing, and classic cars. Marks parents would often take him and his brothers on family trips to Galveston. He cherished those memories so much, that he continued the tradition with his wife and children. Mark loved to travel. When he would take his family on trips, he preferred to drive instead of fly, with the intention of finding all the interesting places and landmarks along the way. Mark was a devoted husband and father. Nearly all his greatest memories were moments he shared with family. Mark was an outgoing, loving, charismatic man who made lasting impressions on those who knew him. The Final Chapter: Mark battled Amyotrophic Lateral Sclerosis (ALS) the last 10 years of his life. As the disease progressed, his physical conditions decreased, however his positive attitude, amazing sense of humor, and unmistakable smile inspired everyone around him. He was truly a vibrant and happy soul. Even with his limited physical abilities, he made the very most of his situation. He would go on long walks with his son, watch his favorite TV shows with his wife, and enjoyed frequent visits from his daughters and their families. He went on car rides listening to his favorite music, visited with close family and friends, and sat outside to soak in the sun. He even had a speech device giving him the ability to communicate and make jokes, which he loved to do. He always wanted to make people laugh. The last couple months of his life were some of his absolute best while battling ALS. He was happy and felt better than he had in years, he was able to spend amazing quality time with his family. Mark was aware that his disease was terminal and knew he did not want to reach a point where he would become unable to communicate at all, so he voluntarily entered hospice. He passed away very peacefully with his wife and children at his side and had absolutely no pain. Mark is preceded in death by his parents, Bert and Reeci. Mark is survived by his loving wife of 37 years, Carolyn, brothers Richard C. Moody (wife Deborah) of Fort Worth, Michael A. Moody of Duncanville, Bert Moody (spouse Jean) of Crowley, son Matthew Moody of Arlington, daughters Amy Easley (spouse Adriene) of Arlington, Amanda Kropski (spouse Ryan) of Aledo, grandchildren Luke and Eli of Aledo and numerous extended family members.

Send flowers to the Moody family.