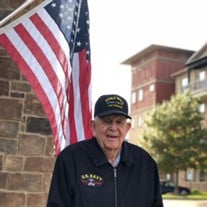 Marvin Grady Gatlin, 97, a greatly-loved Dad, Papa, Great-Papa, brother, uncle, and kind friend left this earth for his heavenly home on May 24, 2021. Marvin Grady, the third child of Marvin Bennie and Mary Gatlin, was born in Dalhart, TX on April 28, 1924. Marvin and his brothers and sisters attended school in Dalhart, and his father taught Marvin and his brothers, Bill and Don, farming skills. Marvin moved to California in 1941 and then served in the U.S. Navy during World War II in the South Pacific as a boatswain mate, Petty Officer Second Class. After his discharge from the Navy following WWII, he became a carpenter and worked primarily in the construction of school and university buildings. Marvin and Wanda Pearl Vinson married April 24, 1948 and were married 64 years before Wanda’s passing in July 2012. Marvin was a very good, honest, and humble man with the “patience of Job”. We never once heard him complain or speak harshly of anyone. He was a man of careful thought and very few words. Marvin was a skilled carpenter and an impressive handyman who could fix anything around the house. He also grew what his family said were, “the best tomatoes in the world!” Above all, he valued family and never, ever, wavered from lovingly supporting our beloved mother through all her years of illness and poor health: From the loss of his father on November 10, 1959, until May 24, 2021, nearly 62 years, he was our Family Patriarch and our Rock of Gibraltar. He treasured his daily telephone calls with his sister Dorothy and the calls from his son Randy and with Geoff who all live in California. He loved watching sports games and loved watching westerns, attending his sons’ games and school events, and attending his granddaughters and great-granddaughters’ games and performances and graduations. His great-granddaughter, Roxye Jane, honored him as “the hero of our family”. He attended the Texas state awards ceremony, surprised by his billboard-sized photograph on the wall. Roxye and Annie adored their Great-Papa. He is survived by one sister, Dorothy Starr of California; son Dennis Gatlin and wife Patti, granddaughter Tessa and husband Tim Meyers and great-granddaughters, Roxye and Annie of Mansfield, TX; son Randy Gatlin and husband Geoff Craig, granddaughter Carrie Gatlin and wife Andrea Everitt and great-grandson Collin Everitt Boland, granddaughters Jenny Gatlin, Jeannie Craig, Jacqueline Martin, and nieces and nephews Gayle and husband Len Luiso, Lory and husband John McGregor, Kerry Starr, Nicholas Capogni, Michael Gatlin, and numerous deeply loved extended family members. He was preceded in death by his parents, Marvin and Mary Gatlin, brothers Don and Bill and sister Bonnie Mae. Marvin had many wonderful people that impacted his life and showed him love and care. Marvin was baptized by Pastor Mike Ramsdell in the First United Methodist Church, Mansfield, TX. He looked forward to seeing friends and shaking hands with the pastors on Sundays. He looked forward to seeing Tessa, Tim and the girls come through the church door to sit with us at church. And, he looked forward to getting one of those special hugs from Denice Wilkens, and the caring way she would always look for him to bring him communion when it became too difficult to manage the aisle. Church pastors and members would sometimes check-in on him. Melinda Conn and her team loved and cared for him like he was their family member, and that provided him and us years of comfort and reassurance, beginning with Wanda’s illness. The staff at the Watercrest gave him lots of encouragement and support, and the staff at the Legends Assisted Living and Memory Care provided quality care and a positive and happy atmosphere that was never short on love. The family is incredibly grateful to those and so many others who made such a difference in his quality of life, and we are grateful to God that we were able to enjoy so much time with him. Marvin Grady Gatlin will be forever in our hearts.

Marvin Grady Gatlin, 97, a greatly-loved Dad, Papa, Great-Papa, brother, uncle, and kind friend left this earth for his heavenly home on May 24, 2021. Marvin Grady, the third child of Marvin Bennie and Mary Gatlin, was born in Dalhart, TX on... View Obituary & Service Information

The family of Marvin Grady Gatlin created this Life Tributes page to make it easy to share your memories.

Send flowers to the Gatlin family.