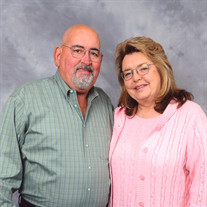 Mary “Char” Charmaine White, 69, passed away on March 21, 2019 in Arlington, TX. She was born on September 17, 1949 in Arkansas City, Kansas to Betty Marie Jo Floyd and Paul Lincoln Price. Char attended Central Texas College and obtained her nursing degree. She married Gilbert “Gil” Wayne White in 1972 in Gregg County, TX and they have 2 surviving children, William “Billy” Wayne White, and Kristina Marie Jo White of Arlington, TX. She was a stay-at-home mother while Gil served in the military until 1986; living overseas in Germany and in the US; Maryland and Texas. Upon moving back to Texas, she worked as a nurse, retiring in 2009 in her final position as a nurse in the Dallas County jail with a 17+ year tenure. She was a supporter of the Irving Police Department, where Gil worked from 1987 until his passing in 2010. Char was truly one-of-a-kind; her sense of humor and laughter, her feisty personality, her tough exterior (for jail Nurses that is a must), her love for the penny slots and her luck with finding the right machines, her compassion for animals – feeding feral or stray cats and dogs, and foremost, despite the distance or time away due to her illness, her love and appreciation for her kids, grandkids, great-grandchild, and close friends. She is survived by her 3 children; Billy and spouse Anne, Kristina, and Rebecca Joanne (Knighten) Occkiogrosso (from a previous relationship) and spouse Dennis; all residing in Arlington, TX, 10 grandchildren, and 1 great-grandchild. She will be laid to rest on April 11, 2019 at DFW National Cemetery followed by a Celebration of Life for close family and friends. In lieu of flowers, the family request that donations be made in Mary's name to the Dachshund Lovers of Texas Rescue https://www.dltrescue.org/info/donate

The family of Mary "Char" Charmaine White created this Life Tributes page to make it easy to share your memories.

Send flowers to the White family.