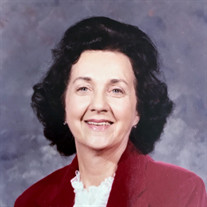 Mary Evelyn Field Ray, age 94, left this earth to be with our Lord and Savior on Sunday, October 7, 2018. Mary Evelyn Ray was born on May 19, 1924 in Kansas City, Missouri to Todd and Lillian Field. She was educated in Louisiana, Missouri and Nebraska. A talented musician, she played the violin, organ and piano. In 1932, her father baptized her and her life’s mission from then on was to tell everyone she met about Jesus. She married William Hervey Henley in 1945. He preceded her in death in 1953. In 1955, she married Burlie Joe Ray. They were happily married for 38 years before he preceded her in death in 1993. Mary worked as a credit manager for 18 years in Fort Worth and then as a credit officer in the Federal Credit Union of Fort Worth. For most of her adult life, she taught Sunday School, Vacation Bible School, and used her beautiful voice to sing in church. Those who knew her knew she was a prayer warrior. She stayed on her knees until she saw her son give his life to Christ and join her in sharing Christ with the world. She fervently prayed for him daily as he followed the Lord’s direction in becoming a pastor. Sitting idle was not her style. She was the president of the United Daughters of the Confederacy, National Society Daughters of the American Revolution, and the National Society of the Colonial Dames XVII Century. She was a member of the National Society United States Daughters of 1812, the Texas Society Daughters of the American Colonists, and the Order of the Eastern Star. Her involvement with most of these organizations exceeded 25 years. Later in life, she joined the Johnson County Genealogical Association, the Burleson Heritage Foundation and became a Texas Ombudsman. Mary was a devoted wife, mother, grandmother and great grandmother. One of her greatest talents was painting with oils. She opened her own art gallery in 1977 and for years she painted, displayed her beautiful artwork in shows and in local businesses, receiving many awards. Each of her grandchildren proudly display her oil paintings in their home. She leaves behind a legacy of love and servanthood. No one carried out their call in life with more passion than Mary did. In addition to her husbands, she was preceded in death by her parents, one brother, one sister and son, David R. Henley. Survivors include one son: Tommy Collinsworth and wife Veda of Ohio; Daughter in Love: Guyann Henley; Grandchildren: Lisa Halfacre and husband Eddie; Sherri Puckett and husband Phil; Angela Keaster and husband Larry; Susan Carrington; Chrystal Barnett and husband Kelly; Tom Collinsworth Jr. and wife Rachel; David D. Henley and wife Nerea; Jennifer Hawkins and husband CJ; Great Grandchildren: Jordan Halfacre, Kayla Anderson, Andrew Halfacre, Austin Puckett, Alex Puckett, Jake Puckett, Derek Keaster and wife Brittany, Caitlin Keaster, Justin Gray, Jared Waites and wife Conda, Cassidy Waites, Kaylee Boyd and husband Seth, Cole Barnett, Cason Barnett, Cheyenne Collinsworth, Kenzie Hale, Abigail Collinsworth, Jon Luc Collinsworth, Jeremiah Collinsworth, David M. Henley and wife Kaylee, Daniel Henley, Gabrielle Henley, Steven Taylor, Maryssa Lopez, Dillion Hawkins, and Torie Hawkins; twelve great great grandchildren and a host of friends. We appreciate the great love and care given by the staff at Grandview Nursing Home this past year. Your devotion to our grandmother will never be forgotten. In lieu of flowers, donations may be made to Grandview Nursing Home, 301 W. Criner Street, Grandview, TX 76050.

Mary Evelyn Field Ray, age 94, left this earth to be with our Lord and Savior on Sunday, October 7, 2018. Mary Evelyn Ray was born on May 19, 1924 in Kansas City, Missouri to Todd and Lillian Field. She was educated in Louisiana, Missouri... View Obituary & Service Information

The family of Mary Evelyn Ray created this Life Tributes page to make it easy to share your memories.

Mary Evelyn Field Ray, age 94, left this earth to be with our...

Send flowers to the Ray family.