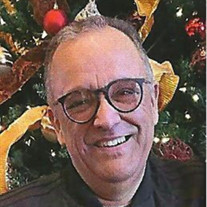 Michael Santoyo Aceves, 70, son of Samuel L. and Valentina Santoyo Aceves was given to God on November 8, 2021 in Arlington, Texas due to complications from a long illness. Michael is survived by his forever loving wife, Leigh, his son Michael Aceves and his wife Celina, grandchildren Rain and Zachary, son Christopher Aceves and his wife Minnie, grandchildren Christopher Anthony and Christian, and daughters Sadie Aceves and Sarah Aceves-Bekkerus along with many aunts, uncles and cousins. Michael was the oldest of nine children and survived by his siblings Paul, Debra, Jerry, Jo Ann, Mary, Clara, and Stephen and preceded in death by his brother Sam Jr, grandparents Modesto and Sanjuana Aceves and Antonio and Narcisa Santoyo. Michael was a veteran of the Vietnam War, stationed at Clark Air Base in the Philippines. He served honorably over 4 years active duty as Sargent and another 8 years in the reserves as Tech Sargent. Michael received many medals and awards for his service including the National Defense Service Medal, Air Force Longevity Service Medal and Air Reserve Forces Meritorious Service Medal w/IOLC. Michael was born in Dallas, Texas and lived in Texas all his life except for his active military service. He graduated from LG Pinkston High School in Dallas, TX in 1970 and earned a Master of Arts in Counseling in 1999 from Dallas Baptist University. He made a career of being a chemical dependency counselor for several decades and owning a private business to help his clients. Michael was proud of his military service. He loved his family, country and the Dallas Cowboys. A man with a wonderful sense of humor and a child at heart, he always wanted to make holidays special. He was a faithful follower of God and a generously forgiving man. He was an amazing Father to his children and the very best Grandfather to his grandkids. Of his many talents was his penchant for always knowing the right thing to say or the best advice to give, and was always there for his family and friends. His love of music-especially The Monkees, cars, scary movies and football were abundantly shared with his loved ones and strangers alike. He will be forever sorely missed, and there isn't a day that goes by where something he passed on doesn't come up. God called you home too soon. Fly High Dad\PePaw! Service will be held at the DFW National Cemetery, Dallas, TX on December 17th at 3pm.

Michael Santoyo Aceves, 70, son of Samuel L. and Valentina Santoyo Aceves was given to God on November 8, 2021 in Arlington, Texas due to complications from a long illness. Michael is survived by his forever loving wife, Leigh, his son Michael... View Obituary & Service Information

The family of Michael Santoyo Aceves created this Life Tributes page to make it easy to share your memories.

Send flowers to the Aceves family.