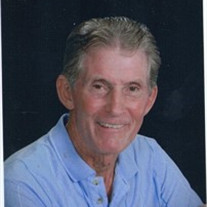 Not sure what to send?

Michael Roy Bryan, age 79, of Fort Worth, Texas, passed away Friday June 17, 2022. Michael was born in Hillsboro, Texas on November 2, 1942. Mike graduated from Cleburne High School, and received his bachelor’s degree from the University of Texas at Arlington. Michael was married to Andria Bryan on May 22, 1981, in Dallas, Texas. He had a career in Software Communications with Vought (which later became Northrop Grumman). His great joys included spending time with his family and friends, fishing on the Brazos River, downhill skiing in Colorado, and playing golf whenever he could. After retiring early, he started hunting and selling golf balls across the north Texas area, becoming known to many as “the Golf Ball man.” He maintained a putting green for decades that was the location of a 4 th of July putting contest tradition for his extended family. His gentle love, happy-go-lucky attitude, and maybe even his corny jokes will be missed by those who knew him. Michael is preceded in death by his parents, Morris and Bettie Lou Bryan. He is survived by his wife, Andria Bryan; sons, Brady Bryan (Carol), and Zacary Smucker-Bryan (Annali); grandchildren, Sierra, Abigail, Leona, and Arlo; sister, Martha Cole (Bill); brother, Richard Bryan (Mary); and many nieces and nephews.

The family of Michael Roy Bryan created this Life Tributes page to make it easy to share your memories.