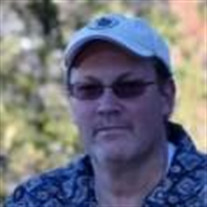 Michael Arthur Hellbusch, 55, went home to his Lord on September 3, 2018. Mike was born September 14, 1962 in St. Louis, Missouri. Mike epitomized love and devotion. He loved his country and respected his flag. He is a veteran of the United States Air Force, serving his country from 1982 to 1987, accomplishing the rank of Sergeant. Anyone who knew Mike knew he had well informed political views and was not shy when sharing them. He loved hard work. Mike earned his Bachelor’s Degree from Pima College, in Tuscon, and eventually worked in the healthcare industry. He attained Vice President, Enterprise Quality and Regulatory Affairs for Joerns after 13 loyal years of service. He loved nature. Mike and Jenny had a cabin in Rhinelander, Wisconsin where they enjoyed listening to the wind blowing through the trees and working outside. Although Jenny was better than Mike at golf, he did at least try. He loved God. Through his illness, he gained a relationship with God that gave him strength to overcome the obstacles that attempted to steal his peace. A good friend and former pastor of St. John’s Lutheran Church, Pastor Bill Dasch, once prayed over Mike. In that moment, Mike felt the power of that prayer. He battled his illness for six years. Mike’s faith was important to him. He loved his wife. For a brief time, Jenny and Mike worked at Allied Signal together. Jenny flirted with Mike and then asked him if he wanted to do a bar-b-que together. Cooking was a common trait with Mike and Jenny. They often had wing cook-offs, grilling cook-offs and spaghetti sauce challenges. Jenny admits Mike often won the challenges, giving him the title of “Pit Master”. Mike and Jenny were married December 29, 1993 and with their hearts full of love for one another, they cooked, together, for 24 years. He loved his family and friends, country music and had a great singing voice. He loved animals, especially his dogs, who filled his life with joy, Syko, Tara and, his current dog, Jackie. Mike is survived by his wife, Jenny and his mother Margaret Brinkman Hellbusch. For those blessed to have known and love Mike, they are better because of him. He will always be missed and cherished. In lieu of flowers, the family has requested donations to the American Cancer Society or St. Jude’s Children’s Research Hospital.

Michael Arthur Hellbusch, 55, went home to his Lord on September 3, 2018. Mike was born September 14, 1962 in St. Louis, Missouri. Mike epitomized love and devotion. He loved his country and respected his flag. He is a veteran of the United... View Obituary & Service Information

The family of Michael Arthur Hellbusch created this Life Tributes page to make it easy to share your memories.

Michael Arthur Hellbusch, 55, went home to his Lord on September...

Send flowers to the Hellbusch family.