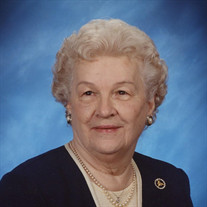 Mildred (Midge) Walker Ormand was born March 27, 1923, in Paris, Texas. She graduated from Paris High School in 1939, Paris Junior College in 1941, worked 1.5 years with The Paris News as proofreader. She then enrolled in North Texas State Teachers College, Denton, Texas, and graduated January 1944, with a degree in Business Administration and minor in Journalism and English. She began work again in March 1944, at the Paris News, as Front-Page Editor. She worked there two years before resigning to marry Alfred Ormand, April 14, 1946. He proposed in a telegram from Europe where he was stationed in WWII. Midge and Alfred had four children, with the first two, Cindy and Alan, born while they were living in Paris. They moved to Groveton, Texas, in the early ’50s, to establish and run an Ormand’s Department Store. This is where Kathy and Yvonne were born, but in the largest town nearby with a Clinic, Crockett. After a brief move to Jasper for Alfred to run the Ormand’s Department Store there, the family moved to Crockett to take over the original Ormand’s store. While living in Crockett, Midge worked 10 years with the Houston County Courier. She and Alfred moved to Arlington, Grand Prairie and Chandler (on Lake Palestine at Sunrise Shores), before their final home together in Arlington. Midge was a loving mother, grandmother, great grandmother, friend, sibling, and aunt to so many. Her friends at the dining table at her final home at Arlington Plaza said that Midge was a breath of fresh air that was very much needed. She hosted most of our holiday gatherings no matter where she lived, and she loved spending time with her family, so we gathered often. She loved her Lord and looked forward to resting in His Loving Arms for eternity. Midge was preceded in death by her mother and father (Bessie Berneda McLain and Walter Caswell Walker), her husband (Alfred Wilson Ormand, Sr.), her sister (Lucille West), her brothers (Walter “Dub” Walker, Jr. and Lloyd Walker), and her son-in-law (Larry Shasteen). Survivors include her four children and spouses (Cynthia “Cindy” Shasteen, Alfred “Alan” Ormand, Patricia Kathryn “Kathy” and Roy Smith and Yvonne “Vonnie” and Gary Johnson), her 8 grandchildren (Elizabeth Ann Shasteen and Shawn Chitwood; James Michael and Sara Shasteen; Russell Casey and Nicole Smith; Melissa Kay “Mitzi” and Robbie Coulter; Jason Paul and Joyce Shasteen; Megan Denise and Nick Shifflett; Daniel Cody Johnson; and Jerrell Glenn Smith and Kari Wilborn. Also 16 great-grandchildren (Ethan, Mallory, Aleesiya and Lexie Chitwood; Devin Coulter; Evan, Matthew and Sam Shasteen; Jaiden and Jaaron Shasteen; Dallas Elizabeth Smith, Sawyer Belle Smith and Teagan Wayne Levya; Adley, Benix and Truely Shifflett). Midge lived to be 95 years old and was still active in her independent living apartment at Arlington Plaza since moving in on October 1, 2018. Midge will be laid to rest in the Dallas Fort Worth National Cemetery alongside her husband, a veteran of WWII, on Friday, December 28, 2018, at 12:30 pm, followed by a celebration of her awesome life in Barnabas Hall behind her church, St. Barnabas United Methodist Church, 5011 W. Pleasant Ridge Rd., Arlington, Texas 76016. All are welcome to join us. In lieu of flowers, the family request donations be made to St. Barnabas Music Ministry or Free Open Arms Clinic.

The family of Mildred Ormand created this Life Tributes page to make it easy to share your memories.

Send flowers to the Ormand family.