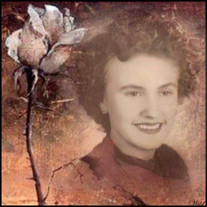 On Wednesday September 18, 2019, Mildred went to be with the Lord. She was surrounded by family and she slipped peacefully into her heavenly eternity. Mildred was born June 28, 1932 to Oscar Turner and Blanche Mildred Jay. She was raised with her brother and four sisters in Sherman, TX, and eventually arrived in the Grand Prairie area. She met and married Lee Seeton and they had three children together, Sharan, Ronnie, and Michael, the last of whom died tragically at age 15 in a car accident. She would later remarry Elliot “Chuck” Richards, with whom Mildred had her last child, Angela. God and family were Mildred’s entire world. She loved Jesus and held a strong Christian faith, which kept her going through countless tragedies. It may have appeared that Mildred endured a difficult life, fraught with tragedy, but she never saw it that way. She took comfort in the arms of her faith and family, and she never spoke a bad word about anyone. She never complained about her hardships. And even though Mildred didn’t have much in terms of material belongings, she would have given anyone the shirt off her back if they needed it. She was the epitome of selflessness and forgiveness. Mildred loved singing gospel music and playing the guitar, and her happiest moments were spent in the presence of her many children, grandchildren, and great-grandchildren. Mildred leaves behind a legacy of love, light, and faith. She was the most loving daughter, sister, mother, and grandmother. She is preceded in death by her parents Oscar Turner and Blanche, brother Oscar, sister Wanda, her sons Michael and Ronnie, son-in-law Randy, Lee Seeton, and dear friend Bill. Mildred is survived in death by her sisters Rosemary, Judy, and Shirley; daughters Sharan and Angela; Elliot “Chuck” Richards, grandchildren Abigail, Jay, Todd, Whitney, Chanda, Trista, Sabrina, Brittanie, Tiffanie, Dustin, and Michael Jr.; great grandchildren Kaylee, Hannah, Tyler Grubbs, Gabrielle, McKenna, Olivia, Charles, Jacob, Shelby, Tyler Cobb, Caleb, Kinley, Emory, Aubry, Jayden, Bailey, Bentley, and Royce; and great GREAT grandson Oakes.

On Wednesday September 18, 2019, Mildred went to be with the Lord. She was surrounded by family and she slipped peacefully into her heavenly eternity. Mildred was born June 28, 1932 to Oscar Turner and Blanche Mildred Jay. She was raised with... View Obituary & Service Information

The family of Mildred Irene Richards created this Life Tributes page to make it easy to share your memories.

Send flowers to the Richards family.