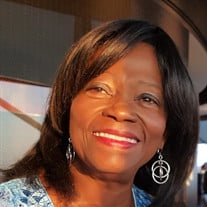 Myrna Louise Wheeler was the second child of Eric and Mabel Card. Born in Belize, Myrna moved to New York with her parents and brother when she was 6 years old. Growing up, Myrna was known for her cheery disposition. She got her first job at age of 15 at ‘Friendly’s where she was complimented for her smiles. At Hempstead High school, Myrna was a majorette where she met Rickey Wheeler from the rival football team. The two were inseparable and were married July 1, 1972. Myrna went on to further her education at Nassau Community College. Soon after, Rickey joined the army and they were stationed abroad and at several Army installations in the states for 14 years. Myrna and Rickey had three sons; Rickey Jr., Charles Douglas, and Aaron Maurice. They were married for 46 years until Rickey’s passing July 15, 2018. Myrna was an artist. She was writer and had a few poems published. Her poem “Gateways” inspired a short film by the same name and was screened at a film festival. She started painting on canvas at first as a hobby and eventually sold several paintings. Myrna had a vivid imagination. Her stories of her dreams could captivate you. She would sometimes take a nap and come back with the next chapter. Myrna worked as a coordinator for Head Start in Rockville Centre, NY where she thrived making an impact on the community by ensuring preschool children were nurtured emotionally, psychologically, and socially through health and nutritional support until she retired. She was passionate about all areas for her life, but her family was her priority. She was a fierce protector and supporter of her sons and encouraged them to pursue their gifts. She loved her grandchildren even more. Myrna had health challenges that were linked to diabetes. But, “She did it Her Way”. She was stubborn, optimistic, head-strong, gracious, humble, funny and sometimes threw caution to the wind. Myrna enjoyed conversations about religion, faith and was not afraid to challenge uncomfortable topics. Her television was usually set to religious programming which increased her discernment and curiosity. Given the opportunity, she would eagerly shared her new knowledge. She enjoyed life to the fullest. She enjoyed traveling, Sunday brunch, was a great cook, appreciated gospel music, and loved a good game of spades… as long as she was winning. Myrna was baptized and accepted Christ as her savior. She was a member of Hempstead Methodist Church in New York. When Myrna and Rickey moved to Florida, they continued worshipping the Lord at local churches in Palm Coast. Since moving to Texas, Myrna recommitted her life to Christ and attended Crossroads Christian Church in Grand Prairie and was a part of a connect group. Myrna transitioned to the next life on New Year’s Eve, 12/31/2019. She is survived by her mother Mabel Constance Card; her sons, Rickey Jr., Charles Douglas and Aaron Maurice Wheeler; her brother Eric Anthony, and sisters; Erette, Donna, and Yvette. Her grandchildren; Isis, Rickey III, Aaron, Jirani, Sharle’, Florine, Lareina, Laurice, and Nevaeh. A host of aunts, uncles, nieces, nephews, cousins, and good friends. We will miss Myrna dearly, but we know to be absent from the body is to be present with the Lord. There is no better place than to awake in paradise. She is in a much better place. We know we will see her again. 2 Timothy 4:7-8 I have fought the good fight, I have finished the race, I have kept the faith. Now there is in store for me the crown of righteousness, which the Lord, the righteous Judge, will award to me on that day – and not only to me, but also to all who have longed for his appearing.

Myrna Louise Wheeler was the second child of Eric and Mabel Card. Born in Belize, Myrna moved to New York with her parents and brother when she was 6 years old. Growing up, Myrna was known for her cheery disposition. She got her first job at... View Obituary & Service Information

The family of Myrna Louise Wheeler created this Life Tributes page to make it easy to share your memories.

Myrna Louise Wheeler was the second child of Eric and Mabel Card....

Send flowers to the Wheeler family.