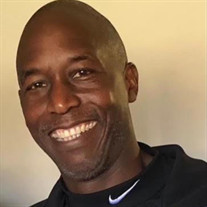 Neville Jonathan Jones, 53, of Cleburne, Texas passed away Friday, October 15, 2021. Born in Fort Worth, Texas on May 31, 1968, Neville graduated from Mansfield High School and received a bachelor's degree in Kinesiology from Texas Christian University. An avid sportsman, he played basketball, fished and was also a 6 th Dan Master Black Belt in Taekwondo. Vocationally, Neville worked as a personal trainer and owned and operated a landscaping business. Neville's passion, however, was coaching basketball, particularly molding the minds and skills of his young players. Watching his players grow in their knowledge of the sport gave him joy, but nothing made him happier than watching their confidence and maturity develop through the season(s). If he wasn't coaching, he preferred to be on the Texas Coast fishing for redfish. He is preceded in death by his mother, Clara Jones. Coach Jones is survived by his wife, Wendy Taylor to whom he was married on September 26, 2021, in Fort Worth, Texas his father, Nathan Jones; his sister, Carmen Jones; his step-children Mackenzie and Ben Taylor; and the hundreds of players he coached over the years whom he considered his children. In lieu of flowers, a fund has been established at Frost Bank to support Neville's passion for assisting young basketball players and their college aspirations. Please make checks out to First Methodist Mansfield Men's Basketball Ministry or contact Frost Bank Mansfield to make a donation to the fund.

The family of Neville Jonathan Jones created this Life Tributes page to make it easy to share your memories.

Send flowers to the Jones family.