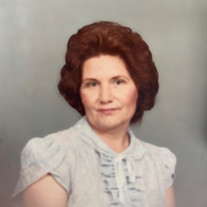 Nida Mae Howell, 86, of Mansfield, Texas passed away Monday April 18 2022 surrounded by her loving family. Nida was born in Grand Prairie, TX on March 19, 1936. She was married to John D. Williams on July 29, 1951. Nida was a restaurant... View Obituary & Service Information

The family of Nida Mae Williams created this Life Tributes page to make it easy to share your memories.

Send flowers to the Williams family.