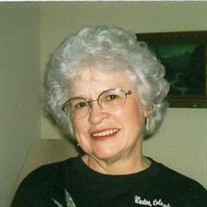 Our beloved mother, Norma Lee Horn, 89, of Harker Heights, Texas, went on to be with The Lord Jesus on February 2, 2020 at 8:05 PM at the Indian Oaks Living Center, Harker Heights, TX. Norma was born November 13, 1930, Old Waco, Kansas. She was the daughter of late Charles Clinton Deatherage and Velma Laura Deatherage (Moody).She was the second of two other siblings. Charles Clayton Deatherage and JoEllen Crispin (Deatherage). On August 17, 1949, she married Clifford Delmas Horn who proceeded her in death on September 15, 2000. They were married 51 years. Norma graduated from Troup High School in 1947 as the Salutatorian at the age of 16. Her father felt she was too young to go to college and the small scholarship she received was not enough to pay for college. She took advantage of a course in Business Machines and Speech at New London High School. After turning 17, she secured a job as a bookkeeper with an insurance company Oklahoma City, OK. While attending church in 1949, she met Clifford D. Horn who was a skilled railroad machinist with The MKT (Katy) railroad). They were married on August 17, 1949 and in 1958 moved to Kermit, TX. She became a licensed vocational nurse finishing at the top of her class. She was a nurse at Memorial Hospital in Kermit, TX and then became the Hospital Purchasing Agent until she retired. Her three children graduated from Kermit High School. Upon her husband's retirement, they moved to Las Cruces, NM to build a house next to her eldest son. Upon her husband Clifford's death, she moved to Mansfield, TX to live near her daughter. Eventually she moved to Killeen, TX to be near her granddaughter's family. She was active in church each place she lived and taught adult bible classes in nursing homes and her churches, and supported the churches and missions. She lived 6 years in Harker Heights, TX with her son Clifford R. Horn and his wife Katie Horn until dementia eventually caused her to reside at Indian Oaks Living Center, Harker Heights, TX. On February 2, 2020 she lost her battle with dementia and finally contracted the flu and passed in a few days to be with her Jesus and all who have gone before. Norma was loved by all. She was proceeded in death by her parents Charles Clinton Deatherage and Velma Laura Deatherage, her older brother Charles Clayton Deatherage, and her younger sister JoEllen Crispin (Deatherage): and a granddaughter Julie Marie Horn (Farnsworth) and a great grandchild Dekiah Jaeden Horn, who passed at 29 days old. She is survived by her eldest son and daughter-in-law, Clifford Reginald Horn and Patricia Kay Horn (Roberts); daughter and son-in-law, Laura Lee Tate (Horn) and David Tate of Keller, TX; and youngest son and daughter-in-law, Kevin Charles Horn and Vivian Pauline Horn (Williams). She also is survived by five grandchildren, Angela Kay Bernier (Horn), Jessie David Tate, Kellina Lee Hall (Tate), and Chris Horn, Rebecca Portillo (Horn) and a total of 18 great grandchildren and 2 great great grandchildren, and a number of nieces and nephews. Graveside service will be held at 12 Noon Saturday, February 8, 2002 at the Mansfield Cemetery, Mansfield, TX . A Memorial Service will be held on Sunday, February 9, at Cadence Church, 815 E Business Hwy 190, Copperas Cove, TX at 3:30 PM with a potluck dinner for family and friends to follow the service

Our beloved mother, Norma Lee Horn, 89, of Harker Heights, Texas, went on to be with The Lord Jesus on February 2, 2020 at 8:05 PM at the Indian Oaks Living Center, Harker Heights, TX. Norma was born November 13, 1930, Old Waco, Kansas. She... View Obituary & Service Information

The family of Norma Lee Horn created this Life Tributes page to make it easy to share your memories.

Send flowers to the Horn family.