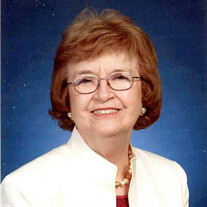 Patricia Ballweg Gazewood died on October 31, 2019. She was a descendent and youngest grandchild of two Texas pioneer families – Patrick and Elizabeth Cully Day and Martin and Anna Ballweg. She was born to Leo and Mabel Day Ballweg in the Webb community, where she grew up on the family farm. She graduated from Arlington High School (literally walking over 2 miles every day to the bus stop from the farm), and received a B. S. degree from North Texas University. She was a school teacher, and early in her career travelled to Venezuela and taught in school for children of oil company workers, where she met her husband, John Gazewood. They were married for over 50 years. Following John’s death, she met a high school beau at a High School reunion, and in 2015 married Commander William T. Anderson. She was a member of St. Maria Goretti Church, where she served as a Eucharistic minister. She was a long-time member of the League of Women Voters, and was a volunteer at Bass Hall. She had a deep appreciation for art, and loved to take visitors to the Kimball or Modern Art Museum, where she was a member. She loved to travel and explore other cultures, and took great pleasure in learning about the genealogy of her family. Pat felt very blessed by her heritage, family, friends and acquaintances. She was preceded in death by her parents, and infant son Christopher, and her husband John A. Gazewood. She is survived by her sister, Martha Durand of Dexter, New Mexico, second husband William T. Anderson, children Dr. John Day Gazewood and wife Patty, of Charlottesville, Virginia, Julie Anne (Gazewood) Jovais and husband Paul, of Mansfield Texas, and son Jason Albert Gazewood Esq., and partner Tiana Letuligasenoa of Fairbanks Alaska, and grandchildren Ginny (and Ben) Fleser of Newport News, Virginia, John Patrick Gazewood of Herndon, Virginia, David Gazewood and Anna Gazewood of Charlottesville, Virginia, and Michael Jovais and Madison Jovais of Mansfield, Texas. Viewing from 6 to 8 pm on Nov 4 at Blessing Funeral Home, Mansfield TX. Rosary at 10:30, followed by Mass at 11:00 AM on Nov 5 at St Maria Goretti Catholic Church, Arlington, TX. Interment at Calvary Catholic Cemetery, Mansfield, TX at 2 pm.

Patricia Ballweg Gazewood died on October 31, 2019. She was a descendent and youngest grandchild of two Texas pioneer families &#8211; Patrick and Elizabeth Cully Day and Martin and Anna Ballweg. She was born to Leo and Mabel Day Ballweg... View Obituary & Service Information

The family of Patricia Ann Gazewood created this Life Tributes page to make it easy to share your memories.

Send flowers to the Gazewood family.