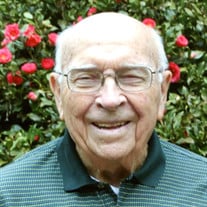 The world lost another member of the Greatest Generation. On October 15, 2019, Paul Wilson Harless ran his final race. He was 97 years old. He is preceded in death by Margaret Carlisle Harless to whom he was married for 62 years. He is survived by his son, Daniel E. Harless (Linda) of Ponte Vedra, Florida, daughter Anne H. Schallenberg (Earl) of Ft. Worth, Texas, and Julia H. Butler (David) of Lincolnton, Georgia. Also 5 grandchildren: Mandee H. Lott (Chris), Jeff Harless (Christie), Lara Goss (Glenn), Angie Shedd (Drew), and Brian Schallenberg (Jackie).; 14 great-grandchildren: Taylor Adams, Drew Harless, Jacob Harless, Carli Lott, Sara Harless, Jesse Lott, Brendan Goss, Caleb Goss, Maddi Goss, Mackenzie Goss, Avalyn Shedd, Wyatt Shedd, Hannah Schallenberg, Josiah Schallenberg, and 1 great great granddaughter, Braelin Crews. As a young boy, he wanted to see the world. He joined the US Navy in 1938. He won a coin toss and had the honor of serving aboard Franklin D. Roosevelt’s Presidential Yacht, Potomac. Paul was an eyewitness to the President’s meetings with many world leaders. Following Pearl Harbor, he was transferred to the destroyer USS John Rogers which was assigned to the South Pacific where he spent the entire war earning 12 battle stars. He was in the battle of Leyte Gulf, Iwo Jima and others and also was at Tokyo Bay when the Japanese surrendered. He was called back to service for the Korean Conflict. He moved to North Augusta area during the start up of the Savannah River Plant where he worked until retirement. He also retired from the Navy. He was an active member of the North Augusta Southern Methodist Church. Paul shared his life experiences with historians and veterans’ groups, especially on Veterans’ Day and Memorial Day. He was interviewed at several WWII museums across the country. One of his passions was to educate the youth of the area about the history of World War II. He would present a program of his experiences in the Pacific Theater. These memories are recorded in a book that he wrote with his daughter-in-law , Linda Harless, called BEYOND THE HORIZON. Paul Harless loved America. He believed in Love of God, Family and Country. A graveside service will be held at Pineview Memorial Cemetery, North Augusta , South Carolina. He will be laid to rest next to his beloved wife. This service is scheduled for 1 pm, Sunday, November 10th. The family will greet attendees after the service at the church for food and fellowship. In lieu of flowers the family requests donations to the North Augusta Southern Methodist Church, 615 W. Martintown Road, North Augusta, SC 29841 or a charity of their choice.

The world lost another member of the Greatest Generation. On October 15, 2019, Paul Wilson Harless ran his final race. He was 97 years old. He is preceded in death by Margaret Carlisle Harless to whom he was married for 62 years. He is survived... View Obituary & Service Information

The family of Paul Wilson Harless created this Life Tributes page to make it easy to share your memories.

The world lost another member of the Greatest Generation. On...

Send flowers to the Harless family.