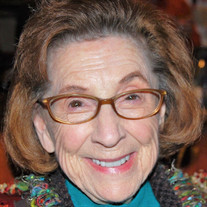 “She was indeed a gracious woman of particularly fine Southern virtues, grace, and charm.” Apt words from a Houston friend Mrs. Peggy Jenkins Stanish Lafferty of Arlington, TN died peacefully in her sleep on Monday, November 4, 2019. She was 93. Peggy was born on February 3, 1926, daughter of William Earl Jenkins and Marie Shipman Jenkins Hart, in Memphis, TN. She was preceded in death by husband Albin J. “Al” Stanish, Sr., husband Lloyd E. Lafferty, half-brother James Jenkins, and infant granddaughter Bella Lafferty. Peggy overcame much adversity in her life. She was raised by her paternal grandparents during the Great Depression. They lived on a cotton farm in Memphis, which later became part of the Memphis Municipal Airport. She spoke countless times of how good the Lord had been to her. She had a keen mind and put herself through Memphis College of Business where she was a member of Beta Sigma Phi. In addition to being a devoted wife and mother, she volunteered in many roles: Cub Scout and Girl Scout leader, American Hemerocallis Society member, Houston Daylily Society officer, Houston chapter, performed with the Singalings and Joyful Sounds of Houston, and was Bending Oaks Garden Club President for 3 concurrent years. She served joyfully in several Houston churches: St. Francis Episcopal Church choir; Bishop's Committee at Emmanuel Episcopal Mission; Vestry Member, choir soprano, and president of Episcopal church women at the Episcopal Church of the Holy Spirit, where she made her Cursillo with son, Jay; Chapelwood Methodist Church choir and Stephen Minister in Houston. In Arlington she sang in the Trinity UMC Arlington choir, was a proud member of PEO, a philanthropic educational organization which originated as a college sorority, and was a member of the Arlington Woman's Club. Peggy often made and delivered meals to friends, even when she and Lloyd moved to Watercrest Senior Living. Peggy will be greatly missed by her family and friends. Her beautiful southern drawl and lilting laugh will long be remembered by those who knew her. She valued family above all else. An only child, she hoped her children would be close friends for life and was pleased to see that it happened! After Al died, she decided to make her home as warm and welcoming as possible by giving a hug to all who entered there. She always made her home available for her children’s Bible study groups. Peggy is survived by her children Albin John "Jay" Stanish, Jr. (Jill) of Eldora, Iowa, Lela Clare Wakin (Dan) of Fort Worth, Peggy Anne Cole (Barry) of Mansfield, and stepson Patrick R. Lafferty (Christy) of Asheville, NC, who will all miss her very much. Peggy was loved by her sixteen grandchildren: John Stanish, Benjamin Stanish, Laura Stanish, Nathan Stanish, Elizabeth Stanish, Katherine Stanish, Christopher Wakin, Daniel Wakin (Jacki), Michael Wakin, Katherine Wakin, Scotty Cole, Cameron Cole, Megan Cole, Seamus Lafferty, Savannah Lafferty, Jedediah Lafferty and great-granddaughter Eliza Grace Wakin. A brief service for Peggy will be held Friday, November 15 at 2:30 at DFW National Cemetery, 2000 Mountain Creek Parkway, Dallas, TX, 75211, followed by the interment of Peggy and Al together. There will be a reception in the Cole home at 4 o’clock. Plants/flowers may be sent to Blessing Funeral Home, 401 Elm St, Mansfield, TX 76063. Memorial gifts may be made to the PEO Foundation in honor of Peggy Stanish Lafferty, https://www.peointernational.org/contributions-peo-foundation. The family would like to give special thanks for the intentionally personal and loving care our mom received from the executives, nurses, caregivers, and staff of Silverado Memory Care, Southlake, TX.

The family of Peggy Jenkins Stanish Lafferty created this Life Tributes page to make it easy to share your memories.

“She was indeed a gracious woman of particularly fine Southern...

Send flowers to the Lafferty family.