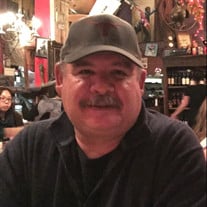 Raymond "Dale" Arthur, Sr., born on July 6, 1959, passed away in Hagerstown, MD last Tuesday, April 29, 2022. Dale, brother of William, Stephanie, Joe, and Elaine, lived in Maryland but was a son of Texas. He arrived home on Wednesday, April 6, 2022. Dale was preceded in death by his parents, Tom and Marilyn Arthur, his brother Joe, and his sister Elaine. Dale is survived by his sons Raymond, Aaron, and Blake, and his daughter Kylie. His grandsons Adam, Ashton, Riley, Roman, and Augie, and his granddaughters Aliana and Sutten. As well as by his brother William and his sister Stephanie. Link to Stream https://video.ibm.com/channel/23866912/video/hjcmxq

Send flowers to the Arthur family.