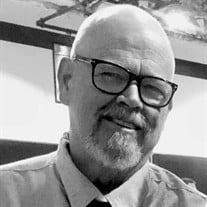 Richard Lee Blackwell was born to Charles and Lillie Mae Blackwell, both deceased, on December 5th, 1946 in Cambridge, Massachusetts. He passed on October 1st, 2021. He is survived by his wife of 47 years, Vicki Carole Blackwell (70), his daughters Joy Ella Reagan (36), Lydia Ruth Blackwell (35), and Sarah Elizabeth Blackwell (33), his grandchildren Oliver Roman Winger (15) and Eleanor Victoria Blackwell (7), his brother Wayne Blackwell (78), his sister Deborah Grinde (63), and his nieces and nephews. Richard’s formative years were spent traveling Europe and the United States for his father’s military service, taking interest in playing music and sports throughout high school. He learned how to play the clarinet in school but was self-taught with what would become his main instrument in life, the guitar. He also taught himself how to play piano along the way. He completed some college and then enlisted in the Air Force. After the Air Force he ventured to New York City, where he began his deeper engagement in musical performance. He moved to San Francisco and was seeing someone, they had a daughter, Heather Barnes Blackwell, who is now deceased. He continued pursuing music in San Francisco, California. He lived in the Heliport in Marin County, where he met his wife who is also a musician. They married in Golden Gate Park in 1974. They continued playing music together and moved to El Paso, Texas. Music was their main focus together until they found Jesus Christ in 1978. They continued playing music that glorified their Savior and then were blessed with their three daughters, all born in El Paso, in 1984, 1986, and 1988. The family moved to Lago Vista, Texas and then to Lillian, Texas where they bought a house where they’ve lived for 27 years. They have continued playing music throughout the years (including some years where they had a family band with their daughters Lydia, Joy, and their honorary son, Mark Phillips) and have played live shows around the country. In his late years Richard taught guitar lessons at Salt Educational Co-Op in DeSoto, Tx. Richard’s life and legacy will be carried on through the memories and stories shared with countless friends, family, and students.

Richard Lee Blackwell was born to Charles and Lillie Mae Blackwell, both deceased, on December 5th, 1946 in Cambridge, Massachusetts. He passed on October 1st, 2021. He is survived by his wife of 47 years, Vicki Carole Blackwell (70), his daughters... View Obituary & Service Information

The family of Richard Lee Blackwell created this Life Tributes page to make it easy to share your memories.

Send flowers to the Blackwell family.