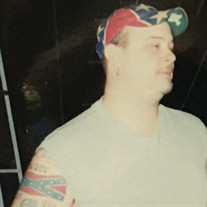 Richard Mark Green (Ricky, TAZ) passed away unexpectedly but peacefully, in his sleep on September 13, 2020 at the age of 43. Ricky is survived by his parents Cindy Cason and Glen (Red) Green; his children (blood or not), Gavin Green, Jessica and Pashence Barrera, and Dion Conklin; his siblings Tory Robinson and Mary Williams; his grandchildren Adalyn and Anson. He was preceded in death by his brother Patrick Green. Ricky was born April 13, 1977 in Fort Worth, Texas. He grew up during a time when it was an honor to be a Boy Scout and achieved the high rank of Order of the Arrow. He has always been very intelligent in all things mechanical and electrical and exceled in his ability to make a dead car run again. His love for his parents, his siblings, his wife and his children did not waiver. He worked on cars as a career his whole working history. He married his best friend of 10 years, Laura Green (wife of 11 years) February 19, 1999 who was also his soul mate. They welcomed their handsome boy together on July 27, 2003, which was a huge part on his life. Ricky was a devoted father. His family was his world. They were the utmost important thing in his life. He enjoyed getting on the floor and playing with his children, going to the park, going to the lake, anything he could do as a family he enjoyed. He enjoyed music of all types. He has traveled to multiple countries: Mexico, Grand Cayman, Jamaica to name a few. Ricky grew up in Arlington, TX, He lived in Joshua, TX for a few years but lived his last 27 years in Moody, TX or there abouts. There will be a celebration of life at Poage Park, 11001 Woodway Dr, Woodway, TX 76712 at 10:30 a.m. on Saturday, 9/26, followed by interment at Moody Cemetery located at 1563 Avenue C, Moody, TX 76557 at 12:30 p.m.. To send flowers, a card or a memorial gift to the family of Richard Green, please send these to: Laura Green 1203 Avenue F Moody, TX 76557

Richard Mark Green (Ricky, TAZ) passed away unexpectedly but peacefully, in his sleep on September 13, 2020 at the age of 43. Ricky is survived by his parents Cindy Cason and Glen (Red) Green; his children (blood or not), Gavin Green, Jessica... View Obituary & Service Information

The family of Richard Mark Green created this Life Tributes page to make it easy to share your memories.

Send flowers to the Green family.