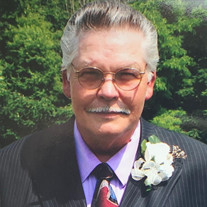 Richard Wayne Gregg Sr., 71, went home to his Father on August 21, 2019. Richard was born to Donald Max and Lorraine (Michau) Gregg on September 5, 1947 in Chicago Illinois. Growing up in Chicago, one of his fondest memories was playing baseball with his father. Richard attended Chicago Vocational High School then furthered his education at Baptist Bible College in Springfield, Missouri. Richard also served his country in the United States Air Force, serving actively from 1966 to 1970, including serving in Vietnam, but also as a reservist, in the Air Force, until 1996. During the years of serving in the Air Force Reserves, Richard served several churches as a Pastor in the 70’s and 80’s. By trade, Richard was a carpenter, as his Savior was, but also worked as a machinist. He helped with the construction of Miller Park -Brewer Baseball Stadium in Milwaukee, Wisconsin. Richard loved his Scottish Heritage and in 1993 learned to play bagpipes. He would later attend a bagpipe school in Scotland. He loved tending his farm and found joy in raising Highland cows, chickens, and sheep, all while having his faithful dog, Haley, at his side. He enjoyed outdoor activities including hunting, fishing, and cheering on his Green Bay Packers. More than anything Richard had a strong faith in God and his family. A hard working man, he always put his family first before himself. He was married to Fay Gardner, the mother of his children, for 30 years. In 2011 he married Judy (Smith) Gregg and lived the rest of his years, in LaFarge, Wisconsin, on his 45 acre farm. Richard is preceded in death by his parents. Richard is survived by his wife Judy Gregg, his sister Lanarae Gillespie, his three sons Richard Wayne II, John Max, Paul Joseph Gregg, grandchildren Shelby Lynn Gregg and Cullen Rudkin-Gregg, and extended family the Klineschmidts.

Richard Wayne Gregg Sr., 71, went home to his Father on August 21, 2019. Richard was born to Donald Max and Lorraine (Michau) Gregg on September 5, 1947 in Chicago Illinois. Growing up in Chicago, one of his fondest memories was playing baseball... View Obituary & Service Information

The family of Richard Wayne Gregg created this Life Tributes page to make it easy to share your memories.

Send flowers to the Gregg family.