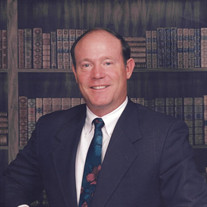 Robert Eugene Burkepile, Jr. (“Bob”), age 71, of Mansfield, Texas passed away Tuesday, August 6, 2019. Bob was born in Colorado Springs, Colorado on May 22, 1948 to Robert and Helen Burkepile. He was the oldest of four brothers and grew up with a love of the outdoors. After graduating Mitchell High School in Colorado Springs, he joined the United States Air Force. While stationed in Altus, Oklahoma in 1970, he met Elizabeth (“Liz”) at the Sonic Drive-In. They married on June 12, 1971 and began their 48-year love story. The Air Force took them around the country and eventually to a six-year stint in Germany. In 1983, they became parents to their only child, Melissa. His daughter was the light of his world from the moment he held her. Bob finished his career with the Air Force as an instructor for crypto maintenance in San Antonio. He retired in 1989 and they moved to Mansfield, Texas. After his military career, Bob worked in construction and project management. When he re-retired, the world became his passport. He was an avid skier and loved trying to keep up with the 30-year old guys. He had only missed one ski season over the past 50 years. Outside of ski season, he was likely to be found at the golf course. He played multiple times a week and travelled with friends to play across the country. In the evenings, he enjoyed playing poker with strangers that ended up becoming great friends. In his spare time, he was the neighborhood handyman. Many times he would forget about his own to-do list in order to help someone else. Bob’s greatest joys in life came in 2008 and 2012 with the births of his granddaughters, Chloe and Lanie. He was affectionately called “BobBob” to them and he never missed a chance to take them on an adventure and tell everyone about how much he loved them. Bob is preceded in death by his mother, Helen Burkepile and brother Michael Burkepile. Bob is survived by his loving wife, Elizabeth Burkepile; daughter and son-in-law, Melissa and David Gamble; granddaughters, Chloe and Lanie Gamble; father, Robert Burkepile, Sr.; brothers Daniel Burkepile (and wife Sandra) and Kenneth (and wife Karen); and so many friends and family that will miss him tremendously. At the request of the family, it will be a colorful event and folks in attendance should avoid somber colors and join in being bright and colorful. In lieu of flowers, the family requests donations to St. Jude’s Children’s Hospital or to do a random act of kindness to make someone smile.

The family of Robert Eugene Burkepile Jr. created this Life Tributes page to make it easy to share your memories.

Send flowers to the Burkepile family.