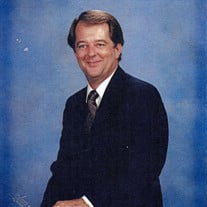 Robert entered his heavenly home on March 19, 2019. He died in the arms of his beloved wife of 53 years, Brenda. He fought a 6 1/2 year battle from a traumatic brain injury and never gave up or stopped fighting. His will and determination was an inspiration to all that knew him. Robert was born on September 1, 1946 in Punxsutawney, Pennsylvania to Clifton and Ellen Gaston. His family moved to Dallas, Texas in June of 1956 and moved two doors down from the young girl that would eventually become his wife. He graduated from South Oak Cliff High School in 1964 and entered the U.S. Marine Corps the same year. On July 2, 1965, he married his young sweetheart, Brenda Treadaway. They were blessed with two sons, Bret in 1969 and Chad in 1974. Robert was an avid bass fisherman and member of the Duncanville Bass Club. He won a lot of tournaments over the years, but his favorite day of fishing was on March 5. 2006 when he caught a 12.89 pound large mouth bass that became the lake record at Joe Pool Lake in Grand Prairie. He and Brenda loved to travel around the United States, as well as to foreign countries. Between work and travel, Robert had been to every state including Alaska and Hawaii with the exception of North Dakota. Once he was only a short drive from there and decided not to go as he wanted to have one state left on his bucket list. He worked as a sheet metal worker in customized restaurant kitchen equipment for 45 years. His work took him to nearly every state in the U.S. as well as to the Bahamas, England and Mexico. His final position was at H&K International as a Quality Manager until his bicycle accident in 2012. Robert was loved by all his family and friends. He enjoyed life to the fullest and nothing made him happier than to be with his family. He is survived by his wife Brenda, his sons Bret Gaston and wife Christiana and Chad Gaston and his wife Donna, his grandchildren Max Gaston and Ava Gaston and his sister Kathy Schilling and brother Tally Gaston.

Robert entered his heavenly home on March 19, 2019. He died in the arms of his beloved wife of 53 years, Brenda. He fought a 6 1/2 year battle from a traumatic brain injury and never gave up or stopped fighting. His will and determination was... View Obituary & Service Information

The family of Robert Allen Gaston created this Life Tributes page to make it easy to share your memories.

Send flowers to the Gaston family.