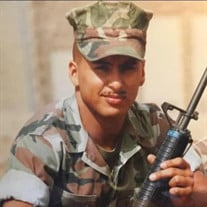 The beloved Robert Arthur Rogers Jr. was called home to be with the lord at the age 52 in Mansfield, Texas on February 11, 2021. Robert was born on February 2, 1969 to Pauline and Robert Rogers Sr. in Los Angeles, California. Robert graduated from Woodrow Wilson High school in 1987. He participated in wrestling, football, baseball and loved playing pool. At the age of 18 Robert joined the U.S. Marine Corps where he served for 4-years on active duty. During his time in the Marine Corps Robert earned The Commanding General’s Safe Driver Award. Lance Corporal Rogers also accumulated over 1,148 accident and violation-free miles while operating tactical and commercial vehicles in support of the 7th Motor Transport Battalion. He also earned a Rifle Expert Badge, Good conduct Medal, National Defense service Medal, Sea-service ribbon, and letter of appreciation. These achievements reflect great credit upon Robert and are in keeping with the highest traditions of the U.S. Marine Corps and the United States Naval Service. During his time in the U.S.Marine Corps, Robert would find the love of his life Gloria Rogers on Valentines of 1987. They were happily married for 32-years. They had two sons, Robert Arthur Rogers III and Ryan Anthony Rogers. Robert was a child of God and was very strong in his faith and exemplified a life of unselfishness. During his spare time he enjoyed fishing, hunting, grilling outdoors, watching Sunday night football and cheering on his favorite football team, his beloved Raiders. He also enjoyed spending time in his front yard and backyard caring for his garden. Robert worked for Packaging Corporation of America (PCA) as a chief forklift driver and also as a shipping leader for 15-years. He will be dearly missed by his wife and children. Robert was preceded in death by his grandparents Gus & Norma Cuadra. He is survived by his wife Gloria Rogers and sons Robert (Jennifer) Rogers III and Ryan (Kimberly) Rogers; His mother Pauline Rogers and his father Robert (Linda) A. Rogers Sr; Brothers Rene (Cecilia) Rogers and Richard (Blanca) Rogers; Grandchildren: Jayden and Alahni Rogers. Due to Covid-19, a maximum of sixty (60) people are allowed in Blessing Colonial Chapel at any given time. Also, face masks and social distancing are required in Blessing Colonial Chapel. Video link: https://video.ibm.com/channel/23866912/video/feuotx

The beloved Robert Arthur Rogers Jr. was called home to be with the lord at the age 52 in Mansfield, Texas on February 11, 2021. Robert was born on February 2, 1969 to Pauline and Robert Rogers Sr. in Los Angeles, California. Robert graduated... View Obituary & Service Information

The beloved Robert Arthur Rogers Jr. was called home to be with...

Send flowers to the Rogers family.