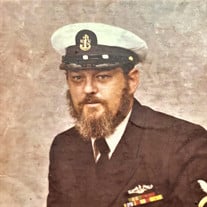 Robert “Bob” Liggette Schuette, 80, died on February 5, 2021 at Methodist Mansfield Hospital in Mansfield, Texas. Robert was born in Liberty, Texas on October 24, 1940. He graduated from Smiley High School in Houston, Texas in May 1960. He entered the US Navy in 1966. He proudly retired from a 22 year career in October 1985 as Machinist’s Mate Senior Chief Petty Officer. After retirement, he worked for PPG Aerospace for 15 years until he officially retired in 2006. He married the love of his life, Patricia on January 1,1983. They raised their family in Mansfield, Texas. Robert enjoyed tinkering in his yard and garage. You could also find him playing outside with his grandchildren. He never met a stranger and was always willing to help anyone that needed it. He was proud to be a US Navy Retiree and you would never see him without his Navy Retiree ballcap. He is survived by his wife of 38 years, Patricia and his children, Kelley Schuette, Johnny Hammill and his wife Kay, Eric Schuette and his wife Catherine, Kimberley Symank and her husband Michael, and David Schuette and his wife, Janie. He was a proud Pawpaw to his 7 grandchildren, Macy, Maegan, Jordan, Logan, Adam, Katelynn and Tripp and great grandchild, Atlas. He is preceded in death by parents, Gilbert Schuette, Mary and Eric Wiles, daughter, Rebecca Hammill and brother, Richard Schuette. Memorial Service will be held at Blessing Funeral Home on Monday, March 15, 2021 at 12:30pm followed by a graveside service at DFW National Cemetery at 3pm.

Send flowers to the Schuette family.