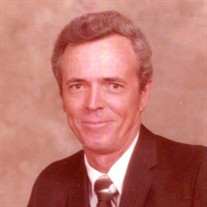 In Loving Memory of Roger Douglas Noland April 1, 1929 - August 27, 2020 Roger Noland passed away Thursday August 27, 2020 at Texas Health Arlington Memorial Hospital. Roger was born in Eolian, Texas on April 1, 1929 to Judson and Maybelle Noland. Roger grew up on a farm working the fields often from sunup to sundown. “It was a hard life but also the best life a kid could have”, he often told his children. Roger attended Breckenridge High School where he graduated two years early as Salutatorian of his class. His aptitude toward engineering played an important role in his life prompting such activity as building his first motorcycle from a mail order kit. Roger also became a recreational pilot during this period in his life. In 1958, Roger met Bernice Marie Glosup at a house party. Their friendship grew into a loving relationship. On February 14, 1959, their relationship was sealed in matrimony. They had three children, David, Doug, and Stacy. During the sixty-one years of marriage they were blessed with eight grandchildren and eight great grandchildren. Roger was devoted to his family. He instilled love, courage, honesty, integrity, and trustworthiness. “You’re with me kid!” was a phrase he said to Bernice that exemplified his sense of responsibility and love for her. Roger attended Arlington State College and SMU where he studied engineering and joined the Air National Guard where he served for 7 ½ years. Roger continued his career growth as an engineer, designer of aircraft parts, and General Manager for Pat Crow Forgings. He later ventured out to start his own business, Roger D. Noland Excavating Company. Roger built his business up to a height he had loaders, scrapers and graders cutting the earth creating beautiful areas for people and businesses. Roger’s business was successful and afforded him the opportunity to retire at age of 55, after fifteen years of working long and hard, six days a week. He enjoyed the simple pleasures of life. His favorite things were riding his Harley, cutting his St. Augustine grass, reading and working crossword puzzles. He was a charter/lifetime member of the Arlington Sportsman’s Club. Roger is preceded in death by his father and mother, Judson Burl and Nora Maybelle Noland, his sister, Gwen Grace, and granddaughter, Stephanie Noland. Roger is survived by his wife, Bernice Marie Noland, his children David Noland, Doug Noland and Stacy Giddens. Roger Noland's Service will be live streamed from Blessing Funeral Home on Wednesday September 2, 2020 at 12:00 PM . Click this link to view service. https://video.ibm.com/channel/SCbG6n7Ep9e

Send flowers to the Noland family.