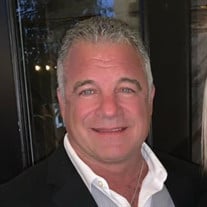 Ronald “Ronny” Christopher Schweyher took the Lord’s hand Monday, March 21st, 2022. He was surrounded by loved ones and friends in Cedar Hill, Texas. Ronny was born in Point Pleasant, New Jersey to David and Eleanor “Ellie” Schweyher on January 8th,1965. Ronny married the Love of his Life, Lisa on October 19,1996 and recently celebrated 25 years of marriage. Ronny Graduated from Texas Christian University in 1987 with a Bachelor’s Degree in Business Administration Marketing. While at TCU he was a Member of the International Fraternity of Phi Gamma Delta. He was also a TCU Officer for the Inter-fraternity Council. He took all of these accomplishments to heart and not only loved being a Horned Frog but also the camaraderie he shared with his Fraternity Brothers. During Ronny’s tenure at TCU he developed the love, passion and obsession of Bodybuilding at a gym near-by where a lot of his best friendships were born. He lifted with purpose and precision. He had a love for taking care of himself which led to a very successful body-building career. He won many competitions over the years and even made a come-back at the Lone Star Classic in 1995. His greatest accomplishments include winning his first Collegiate Championship and then being part of the IFBB Universe Team in Paris in November of 1989. Ronny was a MPR Supervisor during this time for American Airlines during and after college from 1989-1997 to help support his bodybuilding career. In 1994 he decided it was time to follow his heart and help people as that’s what he did best. He opened his first Physical Therapy clinic and continued to open more while still helping in the world of bodybuilding. He helped bodybuilders compete by teaching them posing routines as well as nutrition. He went on to own a management company for practicing physicians. His latest adventure was opening an Intensive Cardiac Rehabilitation facility. Which he accomplished in July 2020. He loved helping people. Always. His biggest passion in life was being an outdoorsman. His loves were hunting, fishing, shooting skeet, yardwork, riding the can-am and laying out in the sun. All this he shared with Lisa. He enjoyed water skiing and boating, but more so he loved Snow skiing with all 3 of his girls, Lisa, Blair and Brianna. He loved going straight down the mountain, (because he could) but also loved waiting for all 3 to get safely down the mountain. He had a hero’s heart even when having fun. He was a member of the Arlington Sportsman’s Club and longed to go to his skeet league every Wednesday night where he not only won a few belt buckles but he donated big as well. He loved the gentlemen and ladies he met there and became amazing friends with them all. They became family to him. The Glory is that he was saved and we know we will see him again on that glorious day when we are all called home. He Loved way “BIGGER” than he ever was. With all our love and blessings in His name. Amen. Ronny was preceded in death by his Father-in-law and Mother-in-law James and Frankie Blair and Brothers-in-Law, John Ward Blair and Jim Marriott. He is survived by his: Loving wife, Lisa Blair Schweyher Parents, David and Eleanor Schweyher Daughters, Blair Bishop and Brianna Schweyher Grandchildren, Brilee Bishop and Brody Frye Siblings, Penny Hasty, Randy & Carolyn Schweyher, Cindy Marriott, Vicki & Dalton Morris, Joe & Gayle Blair, Jamie & Don Welch and many special nieces and nephews. In lieu of flowers, We are asking anyone who feels the need to donate to the MDAnderson Cancer Research Center in Houston in memory of Ronny Schweyher to be applied toward continued research to detect and eradicate pancreatic/liver cancer. Live Stream Link: https://video.ibm.com/channel/23866912/video/ww5jwj

Send flowers to the Schweyher family.